Object of the Week: A Sunset, Bay of New York, by Sanford Robinson Gifford

Sanford Robinson Gifford (1823-1880), an accomplished Hudson River School landscape painter, grew up in Hudson, New York, where his father’s business ventures in banking and ownership of an iron foundry provided the family with great wealth. Gifford attended Brown University from 1842 to 1843 before leaving school in pursuit of becoming an artist. In 1845, Gifford began to study at the New York City studio of John Rubens Smith, a painter, printmaker, and influential art instructor, and in 1846, Gifford enrolled at the Antique School of the National Academy of Design, where he received further artistic training. Inspired by the work of Thomas Cole, often referred to as the father of American landscape painting, Gifford became consumed by his love for landscapes and departed from portraiture to focus solely on painting the natural world. In 1855, Gifford embarked on a two-year journey throughout Europe, studying the work of the Old Masters, J. M. W. Turner, and the Barbizon School (a group of French landscape painters focused on Realism in art). Upon his return to the United States, Gifford’s paintings began to reflect the influence of his travels abroad, particularly the work of Turner; they became imbued with a luminescence radiating from within the landscapes themselves. A Sunset, Bay of New York is a spectacular example of Gifford’s mastery over light. Although it was painted two decades after Gifford’s first encounters with Turner’s landscapes, A Sunset is a particular nod to Turner’s work, with its expansive, dominating sky and glowing sunlight filtered through clouds. Gifford set himself apart from his contemporaries with his use of scientific knowledge about the landscapes he painted, as well as a familiarity with everything from marine architecture and weather patterns to smoke dispersal. As an artist born and raised within the landscapes he so lovingly painted, Gifford had a unique understanding of the territory. Gifford’s respect and admiration for the landscape as an Eden-like haven was shared by fellow Hudson River School painters, but he also differed from them in his quest to simply capture a moment in time with his work, rather than create a story. His intentions were to reflect the beauty of the landscape. In 1870, along with several other artists, Gifford helped found the Metropolitan Museum of Art. The Met honored his passing in 1881 with its first solo retrospective, displayed in the museum’s new building on Fifth Avenue, and published a catalog listing all 735 of Gifford’s known works. In the years since, many of Gifford’s documented works have been lost to time; only about two hundred of his paintings have been located within the last fifty years.

A Sunset, Bay of New York is on display in the exhibition Visions of America through August 19, 2018. 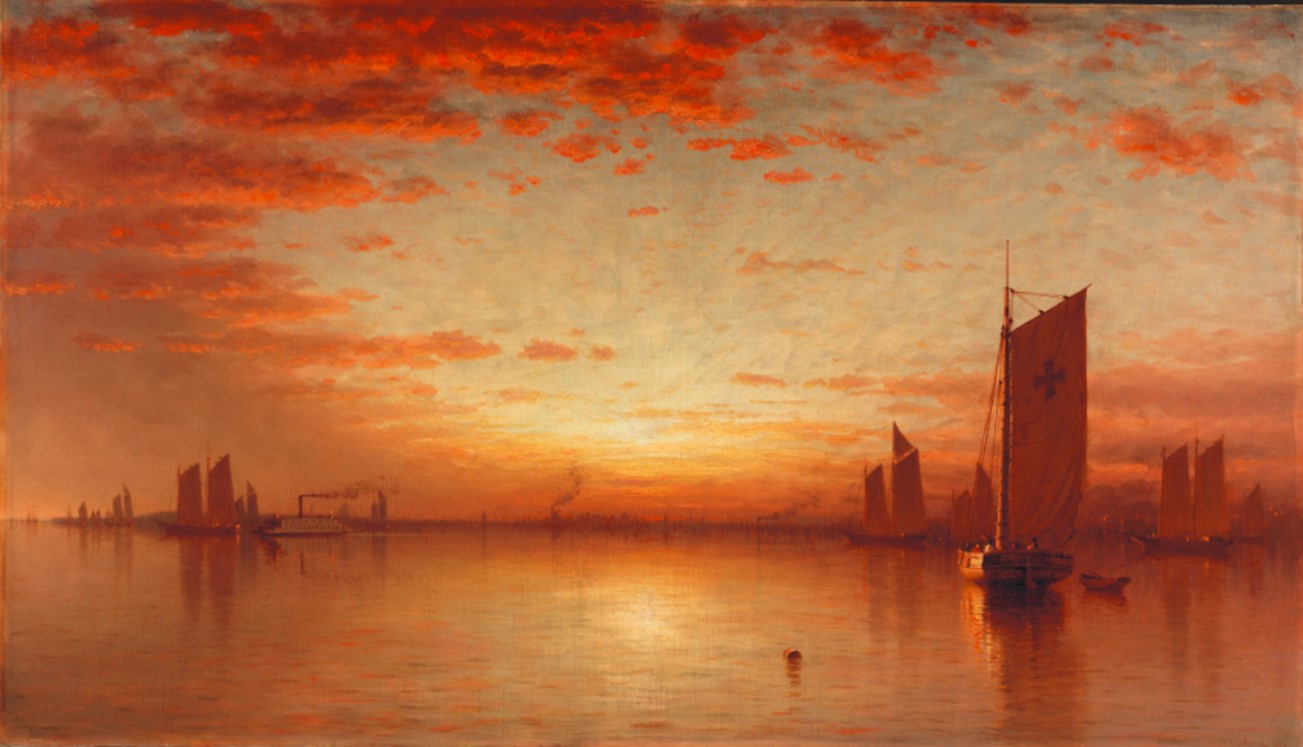