Object of the Week: An Unselfish Articulation of Form by Nakamura Kimpei

Nakamura Kimpei (b. 1935) has a strong family connection to ceramics reaching back to the Meiji era. Born in the town of Kanazawa, which is best known for its sixteenth-century castle for feudal lords of the Tokugawa Shogunate, Nakamura grew up in an old, wealthy home surrounded by artwork and pottery from the past. Nakamura’s great-grandfather, a Meiji-period industrialist, avidly collected tea ceremony ceramics, while his grandfather and father were potters of significant renown. Kanazawa wares were known for their focus on exquisite craftsmanship and respect for the material.

Thus, it was a shock when Nakamura met Kitaôji Rosanjin who had come to Kanazawa to study in his father’s studio. Rosanjin’s casual approach to clay was completely at odds with the craftsman traditions of the Kanazawa area and his family practice. Though Nakamura was only a middle school student at the time, this chance encounter with one of the twentieth century’s most radical potters sparked Nakamura’s future reassessment of Japanese ceramics.

Nakamura found himself at a crossroads: to continue his traditional pottery and inherit his father’s kiln, or to forge his own path as a ceramist. When remembering this earlier period Nakamura explained, “Before the war it was common for sons to follow in their father’s footsteps, and in a way I suppose I did. Clay was a big part of the environment that I grew up in, so it was natural that it would find its way into my hands. But the culture of postwar Japan fostered an environment in which young people were questioning everything that had gone before. Whereas tradition was once seen as an absolute, I found myself challenging that premise.” Nakamura, feeling constrained by his sculpture program, abruptly dropped out of the local arts and crafts college in his sophomore year in order to live in Tokyo.

In Tokyo, Nakamura first found work as a low-level cook in the famous restaurant Hoshioka Saryo. Nakamura was drawn to the restaurant because it was run by his father’s former assistant, Rosanjin. Rosanjin operated Hoshioka Saryo as a way to display his own ceramic wares, and Nakamura used his time at the restaurant to closely study his ceramics. While Rosanjin clearly inspired Nakamura’s investigation of clay, Nakamura looked to his work less for clay techniques than as a guide to create his own specific practice unique to himself and himself only. Nakamura took in the fast-paced, technologically rich landscape of Tokyo and resolved to develop an art form that suited this new, contemporary lifestyle.

The 1960s saw Nakamura fully begin his work as a professional, experimental ceramicist. Energized by the radical work coming from American ceramicists, Nakamura took particular interest in the works featured in the 1964 International Exhibition of Contemporary Ceramics, where American ceramists boldly rejected functionalism for self-expression. In 1969, Nakamura traveled to the United States, arriving in California. Nakamura had seen American ceramics in magazines, but it was revolutionary to see American ceramic production with his own eyes. “Seeing American ceramics born of contemporary culture was such a shock for someone coming from the anti-modern town of Kanazawa,” Nakamura explained in an interview with Japan Times. “It was as if I had got in a time machine and traveled from the Edo Period to the twentieth century.” Nakamura had already been exploring expressive, non-functional pottery prior to his trip to the United States, but seeing American experimental ceramics intensified his desire to find a ceramic tradition that was wholly modern and Japanese. Upon his return to Japan, Nakamura began his quest to bring contemporary Japanese ceramics to the next generation.

Nakamura scoured Tokyo’s art universities for interest in starting a contemporary ceramics program. His passion persuaded Tama Art University to hire him, granting a chance to prove his vision that expressive, contemporary Japanese ceramics had a place in Japanese society. It was a rocky path. Initially Nakamura experienced strong pushback for his work and educational practice, arguing with university administrators from multiple departments. Even at Tama Art University, now known as a leader in the field of contemporary ceramics, Nakamura faced considerable pushback in the 1970s for his rejection of traditional Japanese pottery. Nakamura showed similar irreverence to past traditions in his role as a teacher. Rather than teaching potting techniques, Nakamura pushed his students to ask questions, to doubt, to reflect, and to discover in their artistic practice.

Synthesizing avant-garde ceramics with the rush of city living inspired Nakamura to create what he wryly termed “Tokyo-yaki,” or Tokyo ware. His work reflects the frenetic modern lifestyle the Japanese are compelled to live, as what was once impossible in the past is now possible. In order to capture the essence of Japanese life in the present, the weight of past ceramic traditions needed to be abandoned. For Nakamura, this rejection of past practices was essential, even urgent. He explained that contemporary use of traditional techniques “cannot possibly convey the pressing needs of our own time,” leaving traditional Japanese ceramic forms “mere kitsch replicas.” Advertising, sounds, digital images, and high-speed internet all crashes together in his work, as traditional material reverence mashes together with large, expressive forms. This jittery mixture can be seen in the Everson’s An Unselfish Articulation of Form. The disparate mixture of clay elements in Nakamura’s sculpture reference Pop Art, which utilized advertising and kitsch; Funk Art, which invoked sensuality through vivid color pairings and sensuous curves; and Assemblage, the creation of art through collected, everyday materials. But his work is also lovingly textured with a high level of craftsmanship owing to his long history with the material. While the shape of An Unselfish Articulation of Form is visually fractured, Nakamura’s handling of the clay connects him to his family’s legacy of fine craftsmanship.

An Unselfish Articulation of Form is on view in The Floating Bridge: Postmodern and Contemporary Japanese Ceramics, an exhibition highlighting the under-recognized generation of artists who are now credited with laying the groundwork for today’s contemporary ceramic movement in Japan. 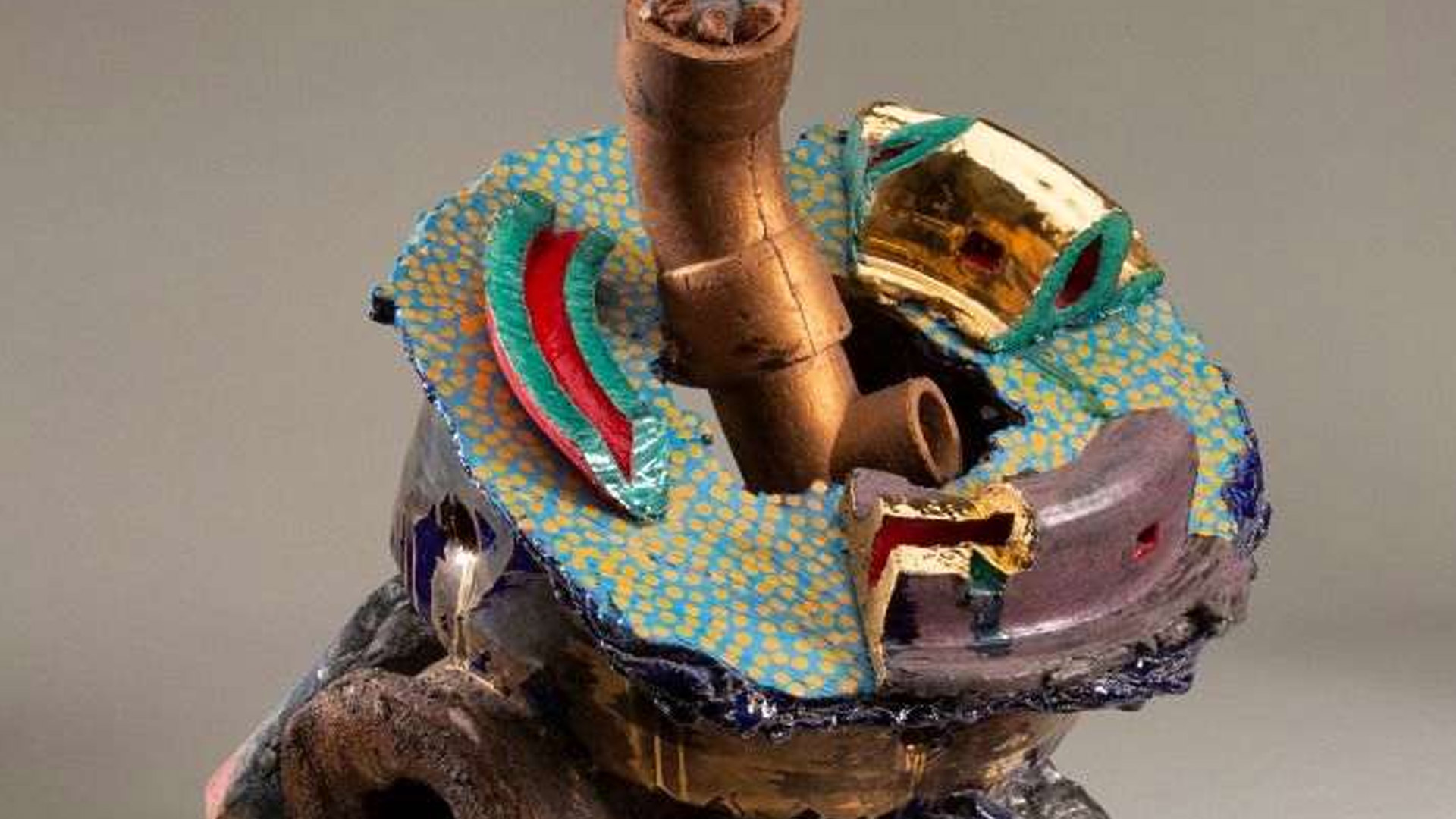