Object of the Week: Black and White Jar, by Vivika and Otto Heino

Vivika and Otto Heino are one of several collaborative husband and wife teams that made a significant impact on American ceramics in the twentieth century. Vivika had extensive academic training in the medium; she studied at the California School of Fine Art in San Francisco, at the University of Southern California under master ceramist Glen Lukens, and at Alfred University, where in 1944 she was the second student to ever receive the Master of Fine Arts from the New York State College of Ceramics. Otto approached ceramics through a less academically rigorous path. After serving in the military during World War II, Otto returned to the United States and used his GI Bill funding to take classes at the League of New Hampshire Arts and Crafts in Concord. Vivika was teaching pottery at the League, and they met in her class in 1949. The couple married in 1950 and for over four decades, until Vivika’s death in 1995, they collaborated as teachers and potters, influencing generations of ceramic students.

Vivika and Otto made an astounding amount of work over the course of their careers. They produced thousands of functional wheel-thrown vessels a year, using five to seven tons of clay annually. Their meticulously crafted, classic forms emphasized volume and interior space, and always reflected the couple’s belief that pottery should be traditional and utilitarian. Along with their prolific output, Vivika and Otto are remembered for their distinctive glazes, which often took years of painstaking experimentation to develop. There was no clear division of labor between the two ceramists. Both threw, glazed, and fired their works interchangeably, often signing each piece “Vivika + Otto” regardless of which of them had created the work.

Often described by Otto as “rugged but elegant,” their work was valued for its natural materials and earthy appearance. The couple deeply appreciated Japanese aesthetics, a style promoted in ceramics by the famed British potter Bernard Leach, who Otto was fortunate enough to meet in England while on leave from his military service. Vivika and Otto often adorned their vessels with decorative elements influenced by Japanese calligraphy. Black and White Jar is one such example, embellished with free-flowing marks of dark brown glaze.

The artists donated Black and White Jar, along with two other works, to the Everson in 1988 after hearing from several potter friends that the Museum planned to publish a catalog of its American ceramics collection. Vivika wrote to the Curator of Ceramics in the hopes of donating work to the Museum that could also be included in the catalog, a proposal the curator delightedly accepted.

Black and White Jar is currently on view in From Funk to Punk: Left Coast Ceramics through April 15, 2018. It is displayed alongside another work made by Vivika and Otto: Wood Fired Bottle. 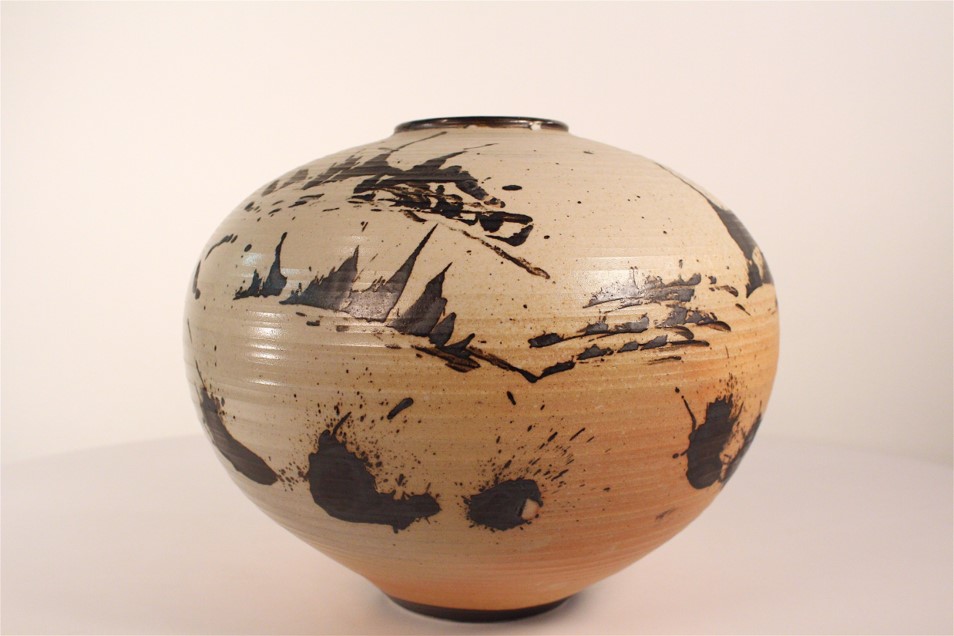