Object of the Week: Cat, by Carl Walters

Carl Walters (1883-1955), a seminal figure in American sculptural ceramics, begun his career as a painter. He first studied at the Minneapolis School of Art in Minnesota from 1905 to 1907 and later trained under Robert Henri at the Chase School in New York City from 1908 to 1911. After marrying in 1912, Walters moved to Portland, Oregon, and worked as a prominent North West painter for the next six years. The course of Walters’ artistic career changed upon his return to New York City in 1919. An avid museumgoer, Walters became enamored with a display of radiant blue Egyptian faience beads at the Metropolitan Museum of Art, and spent the following two years attempting to replicate the beads’ mesmerizing hue. He finally achieved his goal in 1921, and began exploring ceramics as a way to use his newly discovered color. The faience-inspired blue glaze became so characteristic of his work, it came to be known casually as “Walters blue.” Walters established his first ceramic workshop in Cornish, New Hampshire in 1921, but moved to Woodstock, New York in 1922. At this studio, Walters built his own wood-fire kiln and began teaching himself ceramics. His first works were mainly utilitarian vessels that he embellished with calligraphic designs. In 1922, however, he also sculpted a cat accompanied by kittens, the first of the many animal pieces that he would create throughout his career. Much of Walters’ oeuvre is comprised of subjects from the animal kingdom with creative surface decorations. He sculpted very few human figures, but they exhibit the same humorous, good-natured quality as his other work. Walters often created molds for specific animals or figures and used them multiple times, but despite this practice, no two works ever looked exactly the same. Walters used different colors, designs, or small, sculpted details on each piece, making every work unique. Along with using molds, Walters also modeled his works by hand or threw them on the wheel. Walters’ first exhibition of ceramic work was shown in 1924 at the Whitney Studio Club and included many of the artist’s animal sculptures. In the years following, Walters continued to create and exhibit his ceramic work. During the mid-1930s, he received a Guggenheim fellowship for research in glass and ceramics and contributed articles to American Magazine of Art about the technical aspects of the medium. Later in life, Walters moved to Florida and established the ceramics department at the Norton School of Art in West Palm Beach. Made in 1938, Cat is the epitome of Walters’ style. It is about the size of a housecat, but more closely resembles a tiger in appearance. The feline is entirely covered in a white glaze and embellished with black swirling designs. The intricate line-work highlights the curving of the object’s form and demonstrates Walters’ ability to work as both a ceramist and a painter. Cat was first shown at the Everson in 1979 in the seminal ceramic exhibition A Century of Ceramics in the United States 1878-1978. The curators chose Cat for the exhibition to celebrate the integral role Walters played in expanding ceramics beyond a medium used to make only functional objects.[1] Cat is currently on view in The Very Mirror of Life: Ceramics at the Everson 1968-2018, through December 30, 2018. 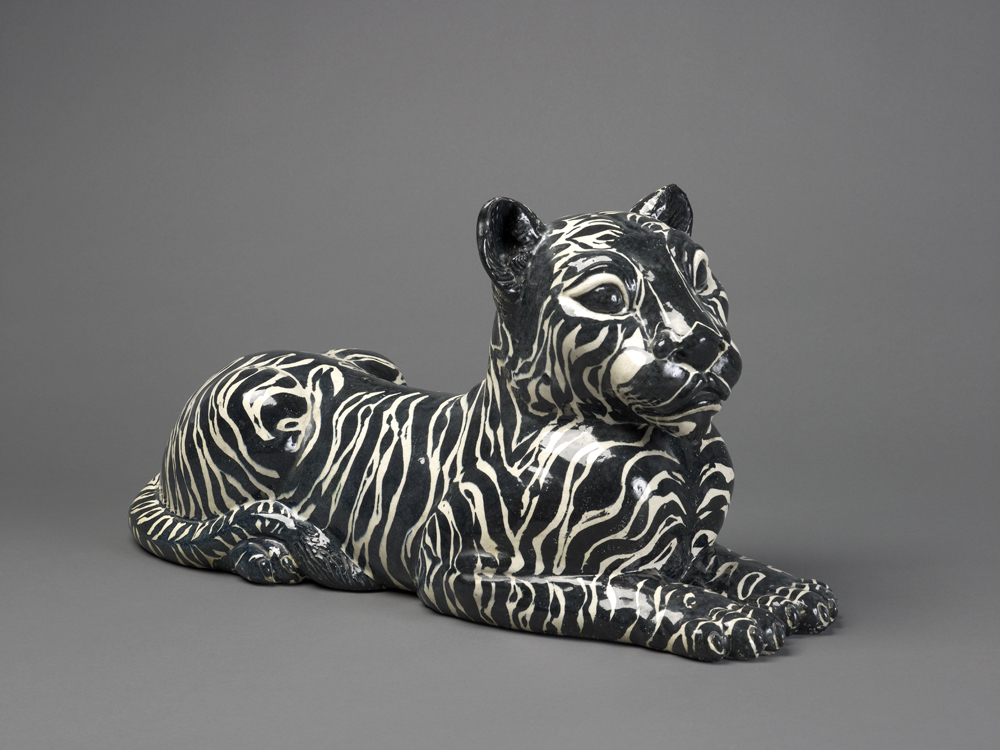