Object of the Week: For $109, by Edward Kienholz

Edward Kienholz (1927-1994) was an American installation artist, sculptor, and early pioneer of assemblage art. Born in Fairfield, Washington, Kienholz grew up on a wheat farm, where he learned carpentry, metalwork, and mechanics. He studied briefly at Washington College of Education while simultaneously working various odd jobs, but left school before earning a degree, deciding instead to move to Los Angeles in 1953 to launch his career as an artist. In 1956, Kienholz established NOW Gallery, a space for California artists to present their work without discrimination of medium or style. For the next several decades, he created installations and assemblages of found objects that pushed the boundaries of creativity while commenting on everything from racial and gender stereotypes to the hypocrisy of American consumerism. Inspiration for a new series struck Kienholz while working on a project in 1969. After realizing he did not own a specific tool he needed, Kienholz questioned why he could not simply trade an artwork for that tool, rather than purchasing it from a store. In response, Kienholz began work on a series of watercolors shown at an exhibition at the Eugenia Butler Gallery in Los Angeles that came to be known as the Barter Show. Kienholz stamped the names of objects, experiences, and sums of money onto watercolor washes on paper, and visitors could then acquire the work by bartering whatever Kienholz had stamped. One painting simply asked for $1, one for $1,000; others required such objects as a chainsaw, a fur coat, 10 screwdrivers, and a Timex Electric Watch. By creating radically different prices for essentially the same work of art, Kienholz commented on the current state of the art market and of the artist. He also created his own form of currency, questioning the process of monetizing artwork and harking back to a mercantile system of barter exchange. Along with For $109, there are four other works from the Barter Show in the Everson’s collection: For $136, For $137, For $138, and For $139. On June 10, 1994, Kienholz died suddenly from a heart attack at age sixty-seven. His wife, Nancy Reddin, honored Kienholz’s artistic legacy and unique body of work by creating an installation out of her husband’s burial. She placed his body in the front seat of a 1940 Ford Packard, with a dollar bill and a deck of cards in his pocket, a bottle of wine on the seat next to him, and his dog’s ashes in the trunk. The assemblage was then buried on land Kienholz owned in Hope, Idaho. For $109, For $136, For $137, For $138, and For $139 are currently on display in Visions of America, on view through August 19, 2018. 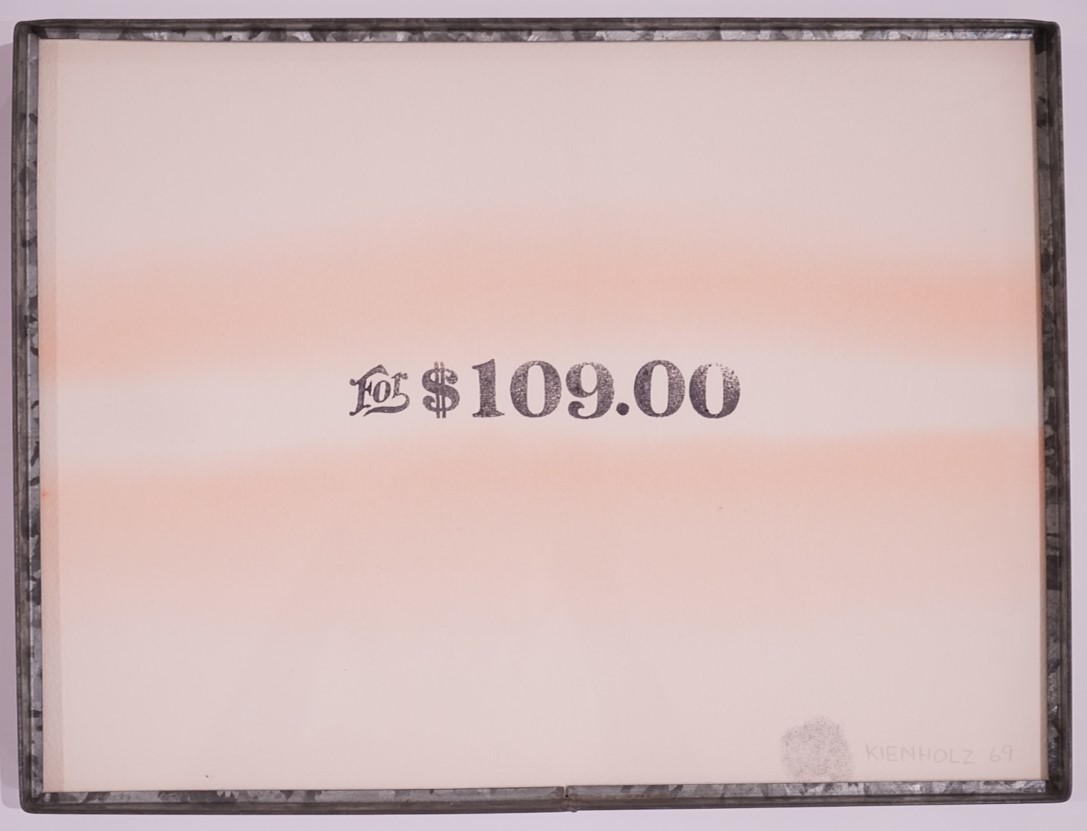