Object of the Week: Gleam through like heaven through a needle, by Angela Fraleigh

Based in New York City and Allentown, Pennsylvania, Angela Fraleigh co-opts the techniques and styles of European Old Masters to create works that explore social constructs of gender, power, and identity. Weaving together elements of realism and abstraction, Fraleigh recasts marginalized female figures from male-dominated sources as daring protagonists within newly constructed narratives. While she typically creates intimate and monumental figure paintings, Fraleigh sculpted several works in clay for her exhibition Between Tongue and Teeth at the Everson in 2016, including Gleam through like heaven through a needle.

To prepare for the exhibition, Fraleigh made several trips to Syracuse, researching Central New York history, Everson history, and works in the Everson collection. She was immediately drawn to ceramist Adelaide Alsop Robineau, both for her exquisite work and her significant accomplishments as an artist. One of America’s preeminent studio potters, Robineau began her ceramics career as a china painter, painting designs on porcelain blanks produced by other craftsmen. In 1901, however, she began making her own porcelain forms, becoming one of a small group of women who made work “from clay to finish.” Fraleigh interpreted Robineau’s process by beginning with raw clay to sculpt a number of portrait busts, which she then covered with a crystalline surface effect similar to the glazes Robineau used on her ceramics. The crystalline glazes themselves have formal parallels with the abstract pours of paint Fraleigh uses on her canvases.

Clay was a new medium for Fraleigh to explore. Discussing the process in an interview with Everson Director Elizabeth Dunbar, she noted, “Learning and working through a whole new medium was challenging but exciting! Hours would go by and I was so deeply entranced in the task before me that I would forget where I was or how long I had been working. What can I say? Adelaide Robineau inspired me—woman as catalyst, just as she should be.”

Gleam through like heaven through a needle is currently on view in Recent Acquisitions in Ceramics through April 1, 2018. To learn more about Fraleigh and her work, visit the Museum Shop to purchase the exhibition catalog Angela Fraleigh: Between Tongue and Teeth (2016). 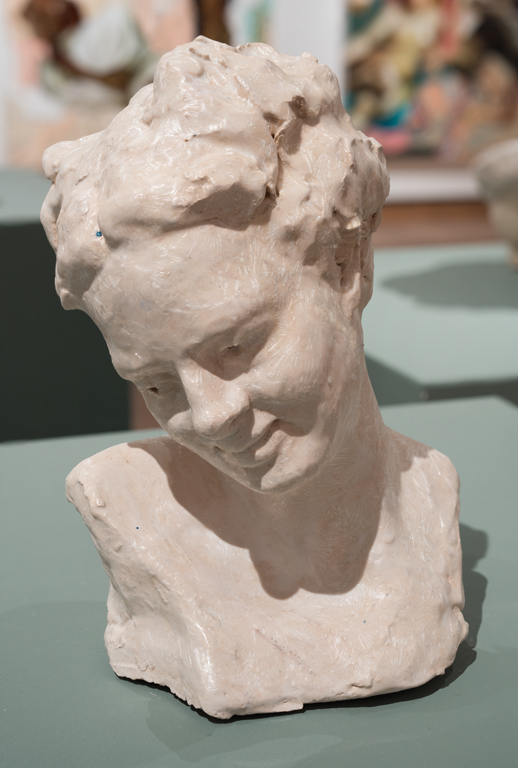