Object of the Week: Helen Taylor Sketching, by John Sloan

John Sloan (1871-1951) began his career as an illustrator for Philadelphia newspapers before moving to New York City in 1904, where he joined a group of artist friends who, together, made a significant impact on early twentieth century American painting. In 1908, Sloan and seven of his peers organized an exhibition of their work as a protest against the stringent policies of the National Academy of Design, which was the driving force behind modern art tastes in the United States. Dubbed The Eight, these artists broke free from academic traditions and European-centric styles of painting. Several of The Eight, including Sloan, also belonged to the Ashcan School, a group of painters known for depicting gritty scenes of everyday life in New York City. The Ashcan artists typically painted residents of the city’s poorer neighborhoods, showing what life was like for a large portion of the population.

In addition to his urban genre scenes, Sloan also painted many landscapes. He first explored landscape painting as a student at the Pennsylvania Academy of Fine Arts in the early 1890s, and intermittently in the years after he moved to New York. In 1914, however, Sloan visited Gloucester, Massachusetts, and discovered that the coastal city on Cape Ann was the perfect setting for plein air painting. He spent five consecutive summers in Gloucester painting several hundred landscapes and seascapes, as well as portraits and scenes of everyday life inspired by Gloucester residents and buildings.

As an instructor at the Art Students League in New York, Sloan quickly attracted a group of students during his summers in Gloucester. Classes consisted of outdoor painting—the primary reason Sloan left the city for summers in New England—where Sloan and his students ambled about the countryside, setting up easel and canvas on rocky outcrops and grass covered fields. Helen Taylor Sketching illustrates just such a scene. Taylor was one of Sloan’s students, visiting Gloucester in the summer of 1916 from her home in Philadelphia. A letter written in 1965 by the artist’s wife notes that Taylor’s nickname was Hell Taylor, “earned for her vivacity.” This work provided Sloan with the unique opportunity to paint two interpretations of the same landscape: the scene that Taylor herself stands in, as well as Taylor’s own landscape painting.

The Everson acquired Helen Taylor Sketching in 1965 and exhibited the work just a few months later in American Painting from 1830. Museum Director Max Sullivan organized this exhibition to highlight the Everson’s American painting collection, which had not been displayed en masse in a major exhibition despite the fact that the Museum began collecting American works in the early twentieth century.

Helen Taylor Sketching is on view in FOCUS through May 20, 2018. 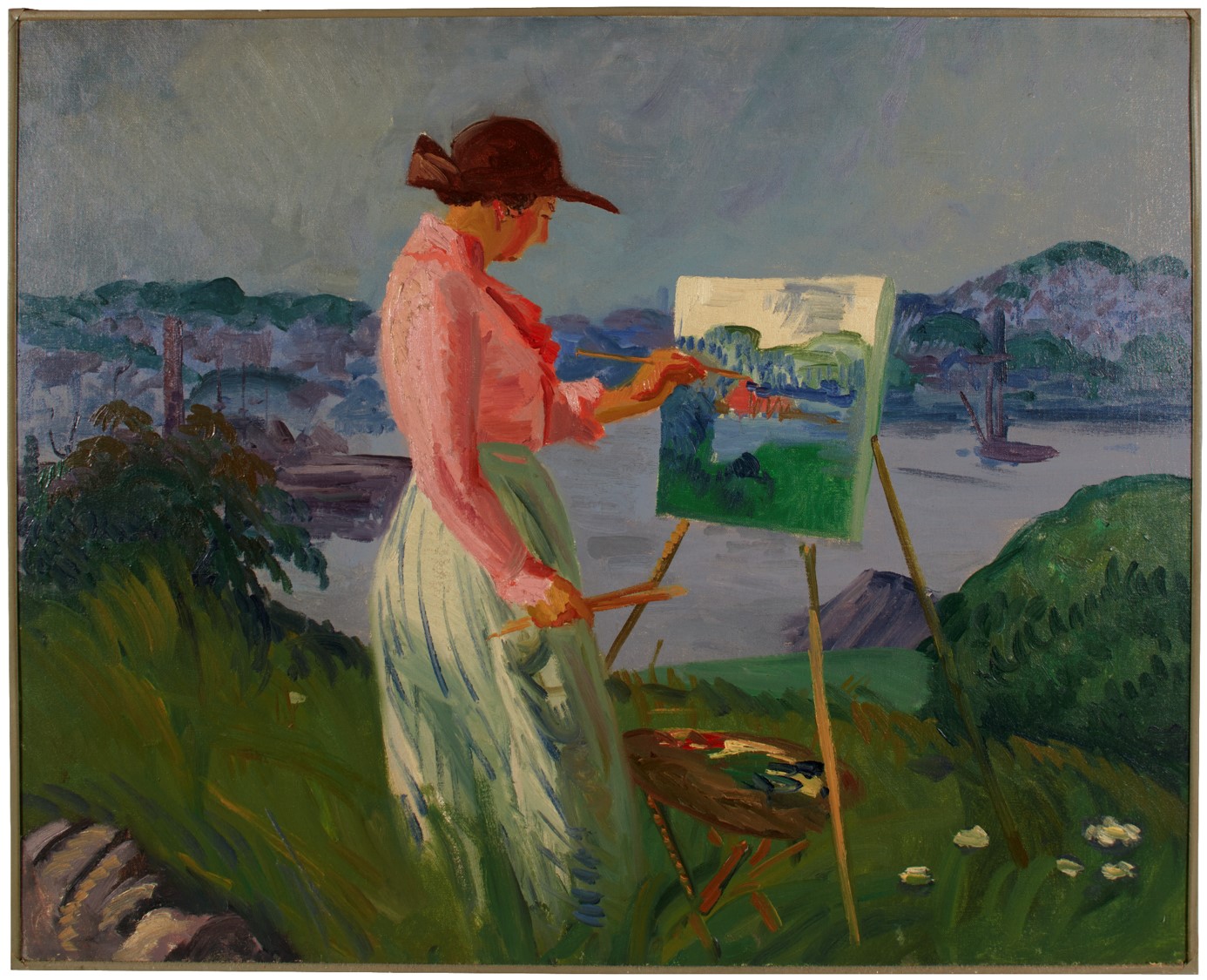