Object of the Week: Jar by Kim Ellington

Kim Ellington (b. 1954) lives and works in Vale, North Carolina and is known for his use of local clays, ash glazes, and a groundhog kiln to make and fire his functional pottery wares. Ellington studied clay at Haywood Community College in Clyde, North Carolina, and was a studio potter when he met venerated Catawba Valley ceramist Burlon Craig. From Craig, Ellington learned the traditional methods of Catawba Valley potters, and since that time, has followed their traditions at his company Ellington Pottery.The tradition of using local clays, ash glazes, and groundhog kilns in the Catawba Valley (located in western North Carolina) began in the early nineteenth century. It is unknown exactly how knowledge of ash glazing arrived in North Carolina, but it is possible potters immigrating from Europe brought the knowledge to their new home in the Catawba Valley. To make ash glaze, a potter mixes wood ash with water and clay, as well as pulverized colored glass, covers their vessel with the mixture, and then fires it in a kiln. Under the intense heat from the kiln, the glaze transforms into an impervious coating on the ceramic object. While salt-glazed stoneware was more common in America at this time, ashes were an endless and readily available resource and far easier to obtain in western North Carolina than salt, making ash glaze the more popular and practical method for glazing ceramics. Ellington creates ash glazes in a range of rich, earthy colors Like his ash glazes, Ellington’s groundhog kiln also follows in the traditions of early Catawba Valley potters. A traditional groundhog kiln includes a low brick tunnel slightly sunken into the earth with a door on one end and a chimney at the other. Pottery is loaded into the tunnel, a fire is built just inside the tunnel’s door, and the chimney draws the heat from the fire throughout the tunnel. Ellington designed and built his version of a groundhog kiln in 1999, increasing the height of the tunnel to allow for the firing of larger batches of work. While Ellington follows the traditional methods of early Catawba Valley potters, he never stops experimenting with firing temperature and duration.Jar was first shown at the Everson in the thirtieth (and last) Ceramic National exhibition in 2000. It is now on display in Socially Gifted: 75 Years of Gifts from the Social Art Club through June 30, 2019. 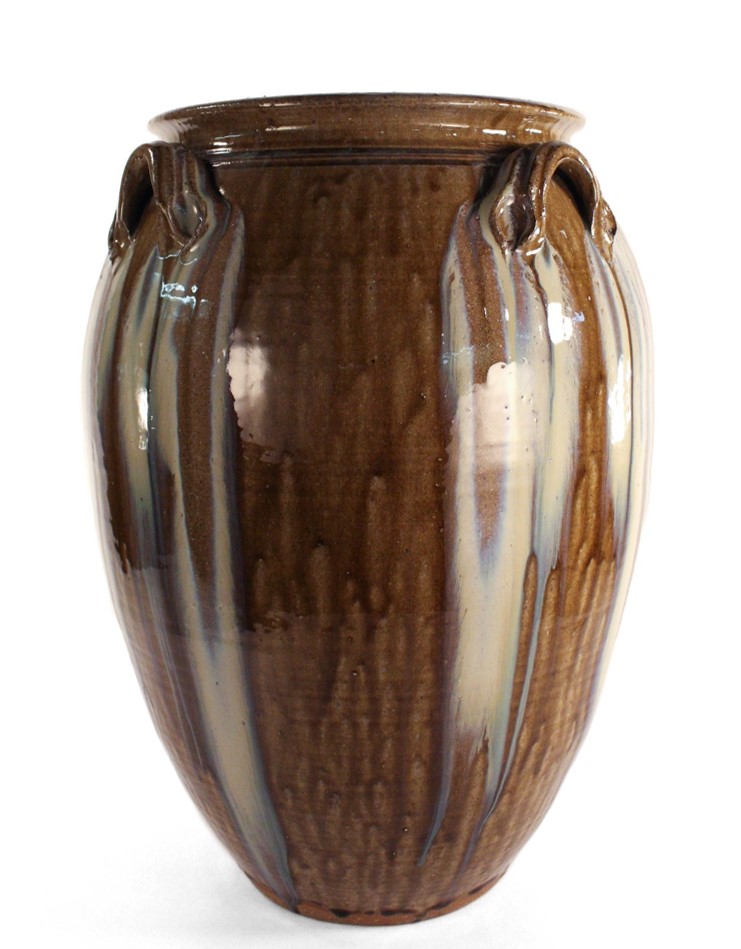