Object of the Week: Mãe d’Àgua by Arnie Zimmerman

Arnie Zimmerman (b.1954) is a sculptor and ceramist currently based in Hudson, New York. In the 1970s, Zimmerman apprenticed as a potter in Lincolnshire, England and as a stone carver in the Provence Quarry of France before returning to the United States to complete his formal education. He received his BFA from the Kansas City Art Institute in 1977 and his MFA from the New York State College of Ceramics at Alfred University in 1979, and then relocated to a studio space in Brooklyn. In Brooklyn, Zimmerman began to make monumental ceramic sculptures inspired by the grand scale of Romanesque architecture he encountered while touring cathedrals in Italy. Struck by the cathedrals’ overwhelmingly massive size and elaborately carved surfaces, Zimmerman began to translate these qualities into large-scale vessels in the 1980s. Over six feet tall and weighing over one thousand pounds, each of these vessels is deeply carved with abstract shapes and geometric designs. Longtime Everson visitors will remember a series of five of these vessels installed outside of the Museum in 1984. The Museum acquired the vessels for its permanent collection a year after their installation, and recently showed three of them in the exhibition Monumental. Mãe d’Àgua is another example of Zimmerman’s large-scale sculpture. Weighing nearly three thousand pounds and constructed of fifty-four individual ceramic tiles stacked vertically on a wooden frame, Mãe d’Àgua was inspired by Zimmerman’s many trips to Portugal, where he visited Lisbon’s Mãe d’Àgua (mother of water), a massive vaulted reservoir fed by the city’s twelve-mile aqueduct. Zimmerman’s Mãe d’Àgua reinterprets key elements of the reservoir’s architecture, such as the soaring vaulted ceilings, paired with imagery of the artist’s making. Constructed in the years before the birth of his daughter, Zimmerman’s sculpture overflows with imagery relating to reproduction, including two fallopian tubes that extend out from the top center of the sculpture. Mãe d’Àgua represents Zimmerman’s ruminations on birth, parenthood, and procreation. The sculpture also speaks to traditional art forms of Portugal, particularly the country’s long history of using ceramic tiles in architectural settings. Zimmerman returned to smaller ceramic forms in the mid-1990s, creating work that explores the human figure. Mãe d’Àgua is on view in the ceramics gallery through June 23, 2019. 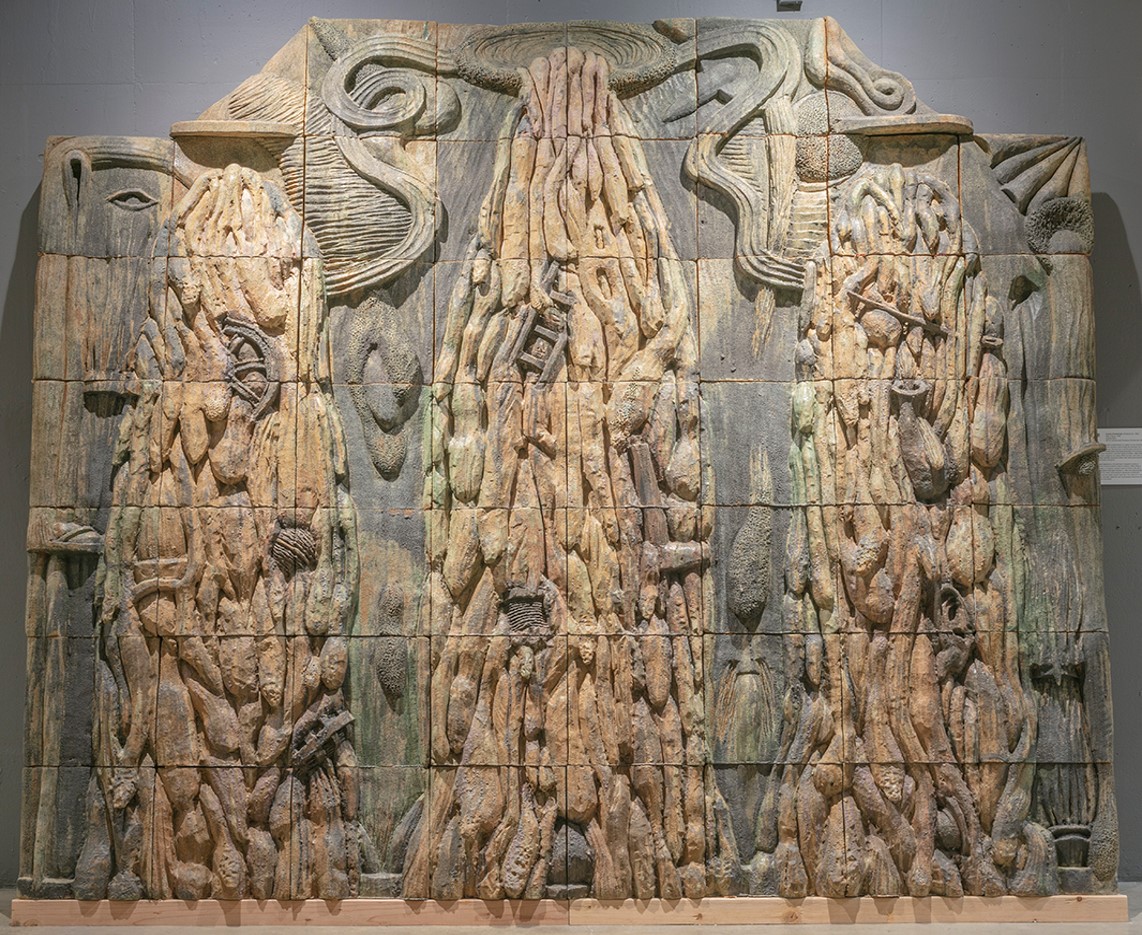