Object of the Week: Maternal Homage by Jeff Donaldson

Jeff Donaldson (1932-2004) was born in Pine Bluff, Arkansas, the youngest of three siblings. Intrigued by his brother’s interest in art, Donaldson began drawing cartoons and comic books when he was just three years old. As a teenager, Donaldson moved to Chicago where he took art courses at the Art Institute of Chicago. He eventually returned to Arkansas to attend AM&N College, where he studied art with John Miller Howard, a painter trained by Harlem Renaissance artist Hale Woodruff in the Social Realist style. Donaldson earned his Bachelor of Arts degree in Studio Art from the University of Arkansas at Pine Bluff in 1954, and in 1963, he earned his Master of Fine Arts degree from the Illinois Institute of Technology. He began doctoral studies at Northwestern University in 1967, and received his Ph.D. in African and African American Art History in 1974. In 1970, Donaldson became chairman of the art department and director of the art gallery at Howard University in Washington, D.C. He taught as a professor in the department, was named Associate Dean of the fine arts college in 1985, and was appointed Dean in 1990, a position he held until his retirement in 1998. Donaldson’s work as an artist and art historian made a significant impact on the Black Arts Movement in the 1960s and 1970s. In 1968, Donaldson, along with Barbara Jones-Hogu, Jae Jarrell, Wadsworth Jarrell, and Gerald Williams, founded AfriCOBRA (African Commune of Bad Relevant Artists) to encourage and support Black artists. As an outgrowth of OBAC (Organization of Black American Culture), which created The Wall of Respect on Chicago’s South Side in 1967, AfriCOBRA contributed to the Black Arts Movement by creating positive portrayals of Black identity. Known for their use of “Kool-Aid” colors, elaborate patterns, and direct references to African culture, AfriCOBRA artists were unapologetic about the importance of Black voices. Donaldson was committed to creating work that was both socially relevant and visually striking. His distinct and bold figurative style celebrated the history of African art and Black culture, and he used energetic colors, intricate patterns, and African iconography to create images carrying messages of Black empowerment and unity. Maternal Homage is a tribute to Donaldson’s mother Clementine Richardson, an important role model in his life. Donaldson shows her as a powerful woman and honors her academic achievements. He represents her belief in the importance of education—she was the first in his family to attend college and worked as a high school principal—with the traditional graduation cap, while the inclusion of a cowrie shell may symbolize her womanhood. In 2018, the Everson organized Jeff Donaldson: Dig, Donaldson’s first museum retrospective. The exhibition examined Donaldson’s activist roots in Chicago and his establishment of the AfriCOBRA aesthetic. The retrospective also traced his evolving aesthetic style, from agitprop tactics to sophisticated studies in iconography and patterning. Maternal Homage was included in the exhibition, and the Everson acquired the work that same year. Maternal Homage is currently on display in A Legacy of Firsts: The Everson Collects, an exhibition that examines over one hundred years of the Museum’s collecting priorities, from the Museum’s earliest acquisitions in 1911 to work acquired in 2019. 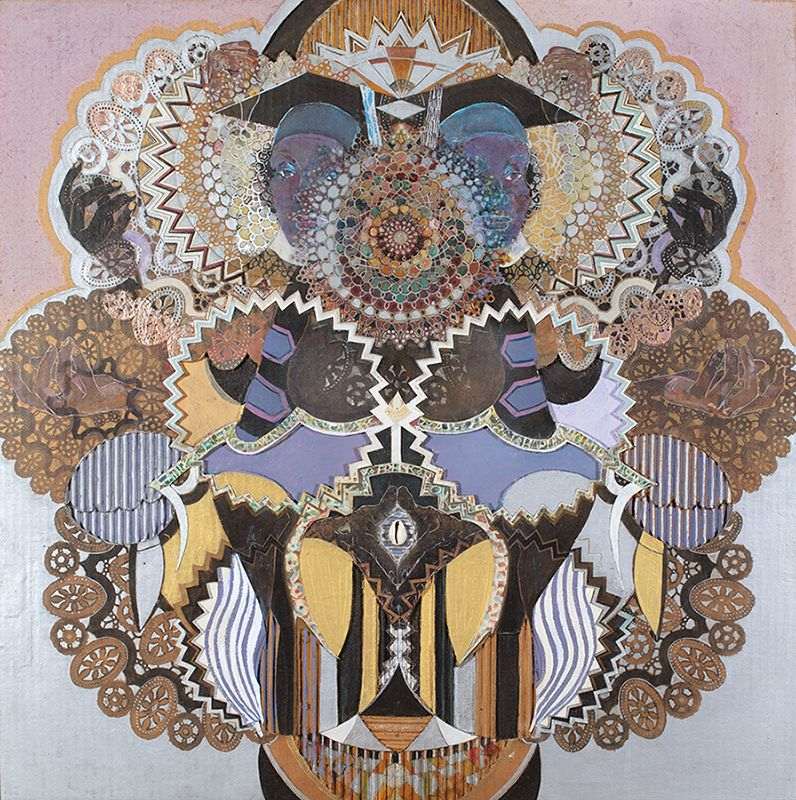