Object of the Week: Palace of the Sultana, Constantinople by Jane Peterson

Jane Peterson (1876-1965) was born in Elgin, Illinois to European immigrant parents. The Petersons prioritized Education, and all the Peterson children furthered their education in some fashion after high school. Jane Peterson would continue her education in both academic and artistic traditions throughout much of her life, training under notable artists such as Frank Brangwyn, Jacques-Emile Blanche, Joaquín Sorolla y Bastida, Frank DuMond, Henry Snell, Charles Cottet, Claudio Castelucho, and F. Hopkinson Smith. It is possible Peterson’s artistic interest sparked at the Chicago Columbian Exposition in 1893. This temporary exhibition was a World’s Fair, wherein nations, states, businesses, and professional organizations presented exhibits and attractions that varied from educational to sheer exaggerated spectacle. Following the Exposition Universelle held in Paris in 1889, the United States sought to highlight American success, industrialization, and progress. It was here that Peterson first saw American Impressionist paintings, including a mural by Mary Cassatt that emphasized the transfer of knowledge between women through the generations—including the arts. Peterson graduated high school and immediately enrolled at Pratt Institute after demonstrating her artistic skill. Pratt appealed to Peterson as it had participated in the women’s exhibit at the Chicago Columbian Exposition where Cassatt’s mural was displayed and the school was well known for its women alumnae. Upon graduation in 1901, Peterson worked a succession of teaching jobs in multiple public schools, but swiftly tired of small-town life. Ultimately, Peterson was named Director of the Maryland Institute Schools of Art and Design, Baltimore in 1905. Despite her professional success, Peterson itched to practice art rather than teach it. She joined artist Henry Snell and his wife Florence—herself a watercolorist—on a painting tour of Europe in 1907. Peterson, on her first tour abroad, elected to stay in Europe when the Snells returned to the States. She stayed in artist colonies in England, Belgium, Holland, and Italy. This trip ignited an interest in travel and painting from life that would define Peterson’s work.

Between 1908 and 1909, Peterson studied with two artists, British artist Frank Brangwyn and Spanish painter Joaquín Sorolla y Bastida. Peterson borrowed elements of both of their artistic approaches, yet adjusted them and made them her own. From Brangwyn Peterson learned to use heavy, flowing contour lines to define forms and figures in her work. Peterson adjusted this approach in her paintings; while forms like the tree’s trunk in Palace of the Sultana, Constantinople are painted with broad strokes that define the shape, Peterson applied her paint in gestural, sketch-like sweeps of her brush. Sorolla, whose family Peterson lived with while in Spain, arguably had the strongest influence. Sorolla advocated for painting en plein air, or painting from life directly and, notably, quickly. Peterson took to this faster way of painting while embracing Sorolla’s bright color palettes. Peterson traveled to North Africa in 1910 where she painted scenes from Algiers, Tunis, and Egypt. Later that year, the Art Institute of Chicago showed her work from North Africa in a solo exhibition. This exhibition presented Peterson as an Illinois success story and established her reputation as a painter of foreign places.

With this critical and financial encouragement, Peterson continued to sate her interest in international travel, pausing only due to the outbreak of World War I. In 1924, Peterson traveled with fellow woman artist Arrah Lee Gaul to Turkey, riding the Orient Express to Constantinople. She adored her time in Turkey, taking extensive notes about her travels. Peterson received government permission to paint throughout the city, a rare occurrence that was not without its challenges. The Turkish government wanted Peterson to paint new buildings to show that they were a nation of progress and to counter the narrative that Constantinople was a city caught in the past. In contrast, Peterson wanted to paint the older structures and landmarks of Constantinople. To Peterson, these buildings had historic value as well as the romanticism that her American audience was looking for. Painted two years after her trip, Palace of the Sultana, Constantinople, might have been an attempt at compromise, with Peterson relying on her impressionistic marks to define an “exotic” building that looks pristine. Her figures are mere daubs of paint that capture the scale of the building yet reveal little about the figures’ clothing, features, or status. Peterson’s color palette of cool pastels nevertheless captures the impression of a bright, sunny day. The Everson Museum of Art, then the Syracuse Museum of Fine Arts, first exhibited Peterson’s work in 1926, the year she completed Palace of the Sultana, Constantinople. Palace of the Sultana, Constantinople is currently on view in A Legacy of Firsts: The Everson Collects, an exhibition that examines over one hundred years of the Museum’s collecting priorities, from the Museum’s earliest acquisitions in 1911 to work acquired in 2019. A Legacy of Firsts is on view through March 22, 2020. 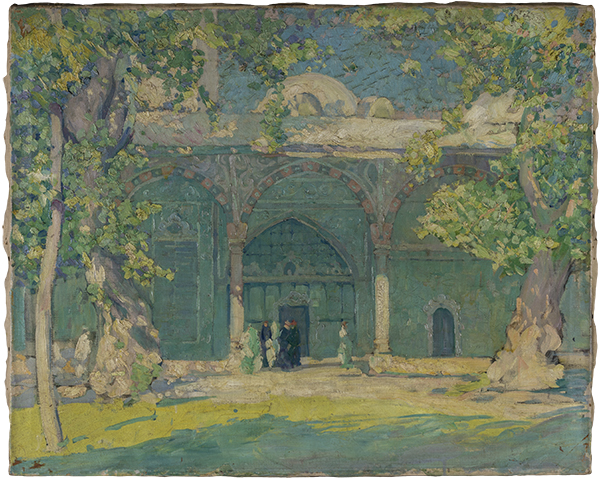