Object of the Week: The Corn Husking, by Eastman Johnson

Eastman Johnson (1824-1906), often referred to as the “American Rembrandt,” is noted as one of the most gifted genre and portrait painters of the nineteenth century. Johnson was born in the remote town of Lovell, Maine, grew up in Fryeburg (just south of Lovell), and moved with his family to Augusta in 1834 when his father became involved with the state government. In the early 1840s, Johnson briefly apprenticed with a lithographer in Boston before moving to Washington D.C. for a few years, where he drew portraits of notable figures, including John Quincy Adams. He eventually returned to Boston, where he became close with the poet Henry Wadsworth Longfellow and his family. This varied upbringing, from small-town, rural life in the Maine countryside to urban living in large cities, provided Johnson with experiences that would inform the work he painted for the rest of his career. Johnson saw firsthand the hard work required of a New England farmer and at the same time, cultivated relationships with powerful and wealthy patrons who would eventually commission his portraits. In 1849, Johnson left America for Europe, where he received his first academic artist training. He studied at the Düsseldorf Akademie in Germany, as well as the museums of The Hague, and for a short time at the studio of Thomas Coutuer in Paris. During this time, Johnson was heavily inspired by the Dutch Old Masters and began incorporating dramatic lighting reminiscent of Rembrandt’s into his work. Johnson returned to the United States in 1855 and began painting scenes of working class Americans, establishing himself as a skilled genre painter with scenes of corn husking, cranberry harvesting, and the gathering of maple sap for syrup. Painted in 1860, The Corn Husking is an excellent example of Johnson’s careful brushwork and use of dramatic light, which causes the golden wheat and corn to glow from an otherwise darkly shadowed barn interior. Unlike many other genre painters of the time, Johnson painted his subjects with a quiet dignity, focusing on their virtues as hardworking people and creating a romantic image of a family happily working together to bring in their harvest. Capitalizing on the American public’s love for these idyllic genre scenes, the printmaking firm Currier and Ives commissioned lithographer Charles Severin to create a reproduction of The Corn Husking only a year after Johnson completed the painting, and the print quickly became a bestseller. The Corn Husking remains extremely popular into the present day; the painting has been loaned for a number of exhibitions at museums around the country since it was gifted to the Everson in 1919. The Corn Husking is currently on display in Visions of America, on view through August 19, 2018. -Sidney Duncan, Curatorial Intern and Steffi Chappell, Curatorial Assistant Image caption: Eastman Johnson, The Corn Husking, 1860, oil on canvas, 33½ x 38 inches, Everson Museum of Art; Gift of Honorable Andrew D. White, 19.116 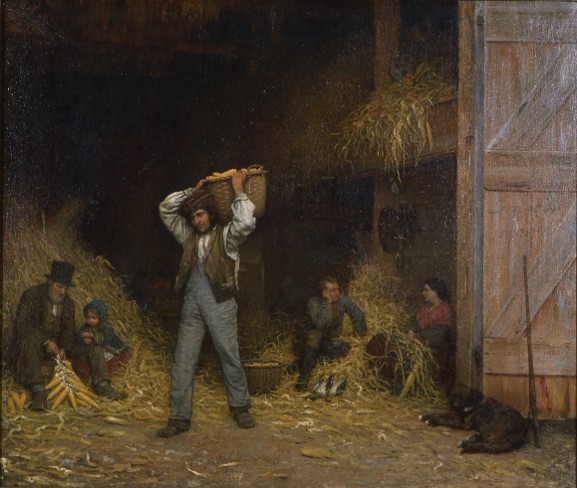