Object of the Week: Three Figures by Betty Feves

Born into a wheat-farming family in La Crosse, Washington, Betty Whiteman Feves (1918-1985) became a prominent West Coast ceramist in the mid-twentieth century. In the late 1930s, she completed her undergraduate degree in art at Washington State College (now University), where she studied with up-and-coming Abstract Expressionist Clyfford Still. In the early 1940s, Feves attended the Art Students League in New York City and completed her master’s degree in Art Education at Columbia University. These few years spent in New York allowed Feves to experiment with clay structures and abstraction. Aside from her mentor Clyfford Still, Feves cited inspiration for her early sculpture career from the work of Alexander Archipenko, Ossip Zadkine, and Henry Moore. Although she enjoyed New York’s art scene, Feves decided to return to the west coast in order to reconnect with the environment of her youth and to raise her growing family. In 1945, Feves began sculpting in Pendleton, Oregon, where she lived and worked until her death in 1985. The color palettes, materials, and forms of Feves’ work are rooted in her local environment, and she took inspiration from organic, natural shapes. Feves was an advocate for “living locally” and only utilized clays and glazes from locally sourced minerals. Her colleagues recalled how Feves abstracted her surroundings and poured her love for the local ecosystem into every creation. The fields and cliffs of Oregon even informed the honey and brown palette of her sculptural work from the late 1940s. Three Figures exemplifies Feves’ interest in meticulous craftsmanship, stability, neutral tones, and abstracted forms. Three elongated figures with no discerning facial features stand in a pyramidal composition, resting on a free-form wooden base. Each gazes upward with hands clasped in front of their waists. The soft grey glaze of their bodies and the light brown of the base align with the palette of Feves’ Oregon-based artwork. Many of her ceramics from the 1950s directly drew from the open-work forms created by Archipenko and Moore, as seen in the hollow torsos of Three Figures. Feves created oval cut-outs in the bodies, which allows the viewer to gaze directly through their forms. Three Figures embodies Feves’ personality as described by her close friend Hal Reigger: “modest, unassuming, ready with an open mind to accept new ideas, new people.” Feves continued her exploration of clay materials and new processes throughout the 1960s and 1970s. She began to teach art and music in her community in order to share her knowledge of local clay with a new generation of ceramists. In 1977, Feves received the Governor’s Arts Award for her promotion of the arts in Oregon public schools. Three Figures is currently on display in A Legacy of Firsts: The Everson Collects, an exhibition that examines over one hundred years of the Museum’s collecting priorities, from the Museum’s earliest acquisitions in 1911 to work acquired in 2019. 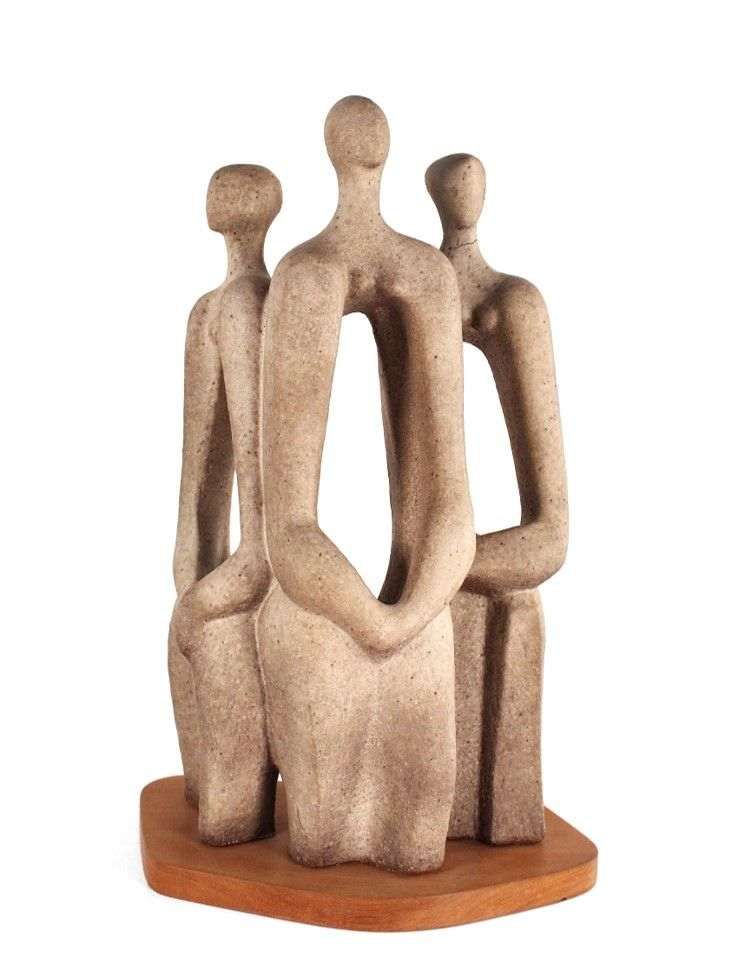