Object of the Week: Untitled #2736 by Todd Hido

Todd Hido (b. 1968) grew up in Kent, Ohio, a city known for the tragic slaying of four university students by the Ohio National Guard on May 4, 1970. While Hido has not lived in Ohio since 1989, his haunting photographs provoke feelings of lost promise emblematic of his infamous childhood town. But the long shadow cast by the Kent State shootings only amplified Hido’s personal challenges growing up in his rustbelt home. “Let’s just say I had a difficult childhood,” Hido said about growing up in Kent, Ohio. His father drank heavily, and his subdivision butted up against the edge of cornfields, leaving Hido feeling poor and disconnected from culture absent what was shown on TV. Riding his bike proved to be an escape for Hido, allowing him to “go anywhere and do anything” so long as he was back before dark. It was not until high school that Hido became serious about photography after receiving encouragement from his high school instructors.

Hido left his hometown for Boston where he enrolled in a joint program with Tufts University and the School of the Museum of Fine Arts, Boston. Hido worked exclusively in black and white, small-format darkroom photography as an undergraduate student. After graduating in 1991, Hido briefly studied at the Rhode Island School of Design as an exchange student before moving to California in pursuit of his master’s from the California College of Arts. Mentored by photographer Larry Sultan, Hido would graduate with his master’s in fine arts in 1996. Sultan’s work and mentorship helped Hido fully realize what would become his House Hunter series. Regarding Sultan, Hido recalled “When I was studying with him I was taking these pictures of interiors, and taking landscapes, and photographing some people, and I remember very clearly Larry clueing me into [the idea that] all this stuff was really about me. I was making these pictures of homes, but it was really about my home and my family, and that was something he really encouraged and brought out of me.”

California is where Hido first began to shoot film in color and would fully develop his House Hunting series. In 1995, Hido began to photograph at night, a major shift in his process that synthesized his background in black and white and color photography. House Hunting is also where Hido’s past and present collide—while shot in California, the restless need to travel and the oppressive weight of run-down homes comes directly from his childhood in Ohio. Hido’s photography avoids clear markers of region or place, instead opting for anonymous roads, streets, and homes that look like they could be from any economically downtrodden part of town.

Hido frequently takes long drives at night, looking for places that “kind of look like home.” It is the light from his subjects that elicits such a feeling of familiarity, offering a pulse to otherwise somber views of cracked vinyl siding and brown, overgrown lawns. But the windows in Hido’s photography never fully reveal the people living within. Closed off with curtains or too high to peek through, the anonymous mystery of these windows positions the viewer as a voyeur, ever curious about the lives hidden inside. “House Hunting” is an apt title, as each home is captured unawares in the dark of night. “It’s interesting that so many people regard their surroundings as inherently private,” Hido observed in response to his work. There is a transgressive quality to his photographs of anonymous homes, as though the viewer has paused their nightly prowl to indulge in looking far too closely at someone else’s residential space.

In Untitled #2736, Hido captures two homes in murky twilight. The light of one upper window joins the light of a streetlamp, illuminating the brown tones of both houses, the dried brown of dead grass, and the mottled stains on the left house. While light shines from the right house’s upper window, curtains cover the window on the left. Like a held breath, the viewer watches the windows for a wary eye to peek out behind the curtain or for an unsuspecting body to step into view. The viewer is positioned outside the two houses, forever looking to the windows for signs of life.

Untitled #2736 is on display in Portal: The Window in American Photography, an exhibition that examines the formal and symbolic potential of windows. 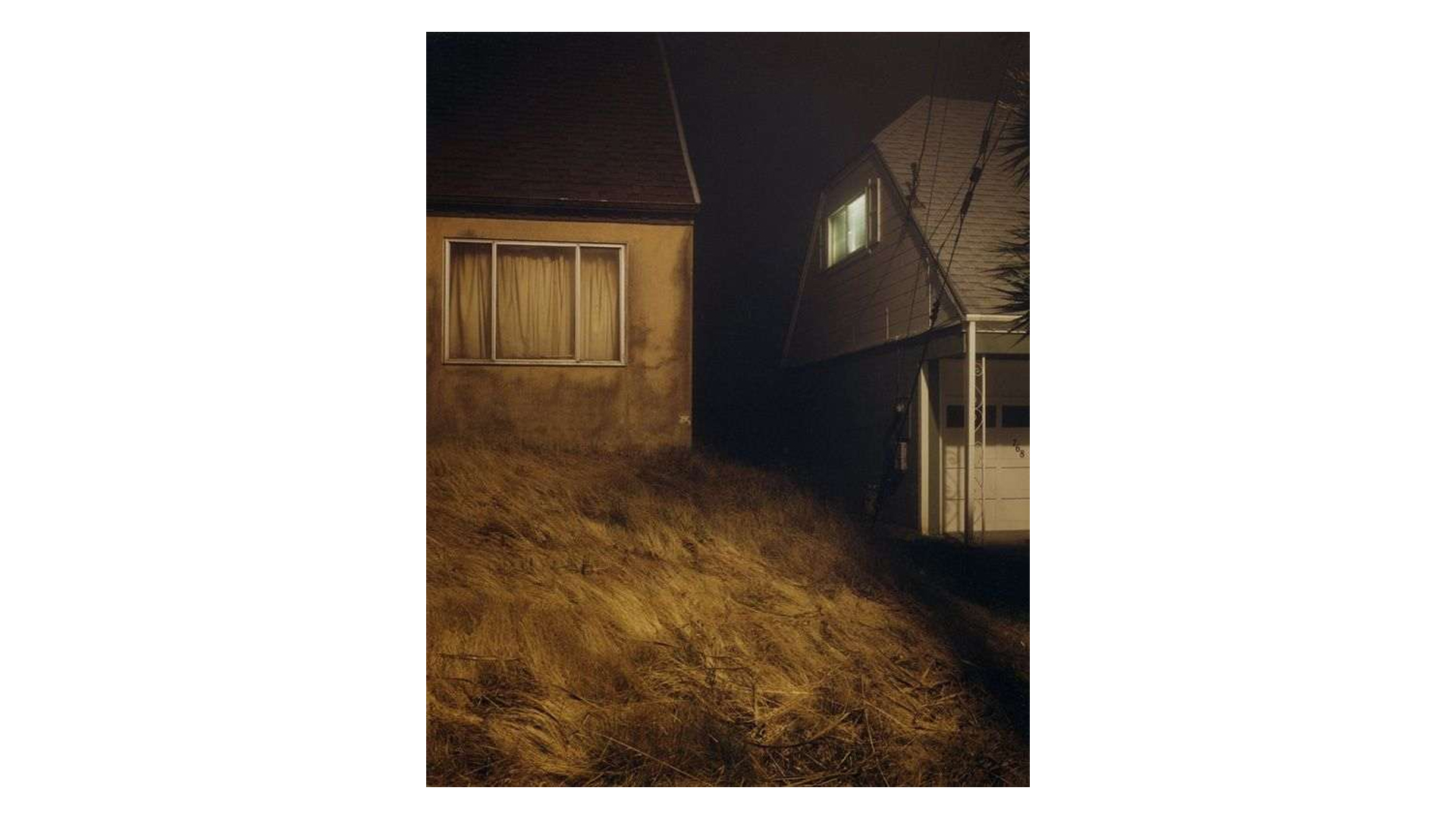