From the Archives: Susan B. Anthony writes to George Fisk Comfort

In late 1902, George Fisk Comfort (1833-1910), founder and director of the Syracuse Museum of Fine Arts, today the Everson Museum, corresponded with women’s rights activist Susan B. Anthony (1820-1906). Anthony played an integral role in the women’s suffrage movement and served as president of the National Woman Suffrage Association from 1892 to 1900. As a suffragist, she fought for women’s and African Americans’ right to vote. The Everson archives contain a single letter from Anthony to Comfort, dated November 28, 1902, which appears to be a response to Comfort requesting to borrow a portrait of her to exhibit at the Syracuse Museum. The letter reads:

Miss Eddy writes me of your wish to have the large picture of me that is now on exhibition here at the Chamber of  Commerce. I believe that closes tomorrow, and I will give the order to Mr. Broadhead to pack and send to you as per her directions.

Is it your wife who is a niece of Dr. Clemence Lozier of New York? I have had frequent communications with her if it is she.

Sincerely yours, Susan B. Anthony

The painting mentioned is likely Susan B. Anthony on the Occasion of her 80th Birthday (ca. 1900), painted by Sarah J. Eddy, referred to as Miss Eddy in the letter. “Broadhead,” misspelled in the letter, is likely George Hamilton Brodhead (1860-?), a landscape artist who exhibited the painting of Anthony in his studio in 1902. The portrait now resides in the Smithsonian’s National Museum of American History, a gift from the National American Woman Suffrage Association made in 1919.

Anthony ends her letter with an inquiry about the connection between Comfort’s wife and Dr. Clemence Lozier. Dr. Clemence Sophia Lozier (1813-1818) was a female physician who, after much persistence on her part, attended lectures at the Central Medical School in Rochester and ultimately graduated from Syracuse Medical College in 1853. In 1863, Dr. Lozier founded the New York Medical College and Hospital for Women, the first medical school for women in New York State. From 1873 to 1886, she was the president of the New York City Woman Suffrage Society and in 1877 she served as the president of the National Woman Suffrage Association. Dr. Lozier also helped fund Revolution, Anthony’s newspaper.

As the letter suggests, Dr. Lozier’s niece was, in fact, Comfort’s wife, Anna Amelia Manning Comfort (1845-1931). Like her aunt, Dr. Manning Comfort was also a physician, having graduated from her aunt’s college. Dr. Manning Comfort was the first female doctor with a degree to open up a medical practice in Connecticut. In 1870, she returned to New York and in 1871, she married George Fisk Comfort. In 1874, Dr. Manning Comfort published a book on female anatomy and women’s education. She also became involved in the suffrage movement in the 1880s.

Preserved in Syracuse University’s Special Collections Research Center is a pamphlet from a National American Woman Suffrage Association convention hosted in February 1894. It is signed by Susan B. Anthony and addressed to Anna M. Comfort M. D., further proof of their friendly relationship.

Today, it is unclear if the Syracuse Museum ever actually displayed the portrait of Anthony, but her letter to Comfort survives as exciting material evidence indicating Comfort’s acknowledgment of Anthony as an important contemporary figure and the beginning of the Museum’s long history of political engagement through the arts. 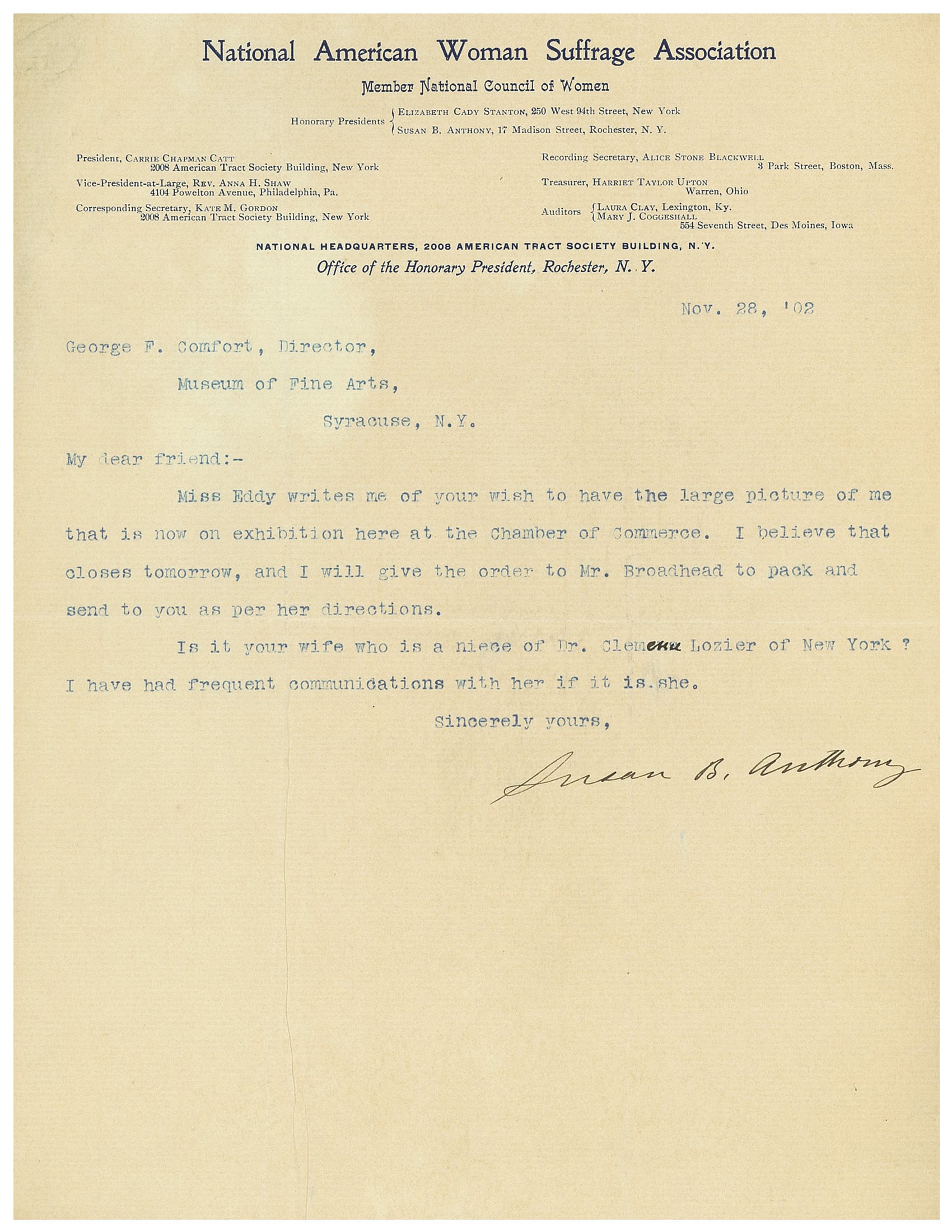