SYRACUSE, NY (January 28, 2022): Opening tomorrow, January 29, the Everson Museum of Art presents Charley Friedman: Soundtracks for the Present Future, an immersive auditory installation that combines nearly 60 second-hand guitars, mandolins, and basses to create a singular instrument. Suspended from the ceiling in a cluster, the instruments form a labyrinth of sounds and vibrations that perpetually shifts as viewers choose their own path through the work, which presents an ongoing playlist of original compositions written specifically for the installation. Through computer software, the instruments “play” various compositions ranging from classical European music to new or recent compositions modified for this installation.

With a body of work that includes creating a gang of bronze squirrels and filling a gallery with a giant molecule made of spinning beach balls, sculptor Charley Friedman looks for ways to bring sophisticated ideas to the public in an approachable form. He pursues this mission once again with Soundtracks for the Present Future, explaining, “Soundtracks straddles the individual and collective experience to organized sound, (i.e., music). Music has the power to be deeply intimate and personal yet can also be used to manipulate emotions and ideas.”

Friedman is a Pollock-Krasner grant recipient, two-time Rema Hort nominee and Smack Mellon “Hot Picks” artist. He has exhibited and performed extensively at galleries and institutions nationally and internationally. His work is in the collections of Walker Art Center, The Brooklyn Museum, The New York Public Library, Stanford University, and Sheldon Museum of Art.

Having followed his work for some time, Everson Curator Garth Johnson said, “The Everson has a long history of creating interactive experiences using music. Charley Friedman’s installation follows in the footsteps of artists who showed at the Everson like Yoko Ono and Nam Jun Paik, who dazzle and engage the public with true multisensory art.”

An opening reception celebration is being held this evening, January 28, at the Everson Museum of Art for the opening of Soundtracks and four other new exhibitions. Charley Friedman: Soundtracks for the Present Future will be on view through April 10, 2022.

Also taking place this evening, the Everson in conjunction with Urban Video Project will present a pop-up screening on the Everson plaza of One-Hour Smile, the video work that originally put Friedman on the map. Starting in 1995, Friedman began filming himself holding a smile for a full hour, a feat of endurance that is hard to appreciate unless you have tried it. Every ten years, Friedman has created a new One-Hour Smile that documents his features as they age. All three versions of One-Hour Smile (1995, 2005, 2015) will be screened tonight to celebrate Friedman’s exhibition opening.

Charley Friedman: Soundtracks for the Present Future is curated by Rachel Adams, Bemis Center Chief Curator and Director of Programs. 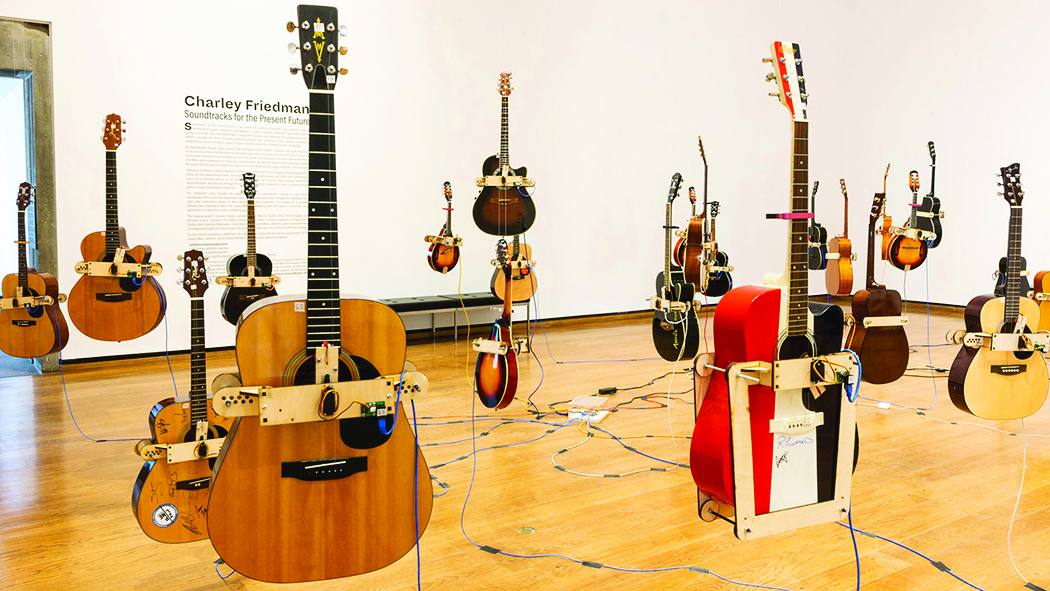