This article was originally published on March 14, 2021 in Syracuse.com. Read the full article HERE.

The illustration “Homecoming” sets the tone for the series, paying tribute to Juneteenth, a day which commemorates the end of slavery in the United States.

When the Covid-19 pandemic forced artist Jaleel Campbell to return to Syracuse from his graduate studies, he turned the unexpected homecoming into a series of works that capture the beauty of life in the city where he grew up and the stories of family members who came before him elsewhere.

Campbell’s first solo exhibition debuted this weekend at the Everson Museum of Art, described by curators as “unique blend of visual art, music and activism to celebrate the beauty and joy of everyday Black life and culture.”

The illustration “Homecoming” sets the tone for the series, paying tribute to Juneteenth, a day which commemorates the end of slavery in the United States.

Campbell took inspiration from a family book that has been passed down generation to generation, beginning with his great-great-great-grandfather Pompey B. Hines and his 17 children.

“That illustration just sparked this whole idea of maybe I should revisit my father’s side of the family—their family history,” said Campbell, who rediscovered the book shortly after returning home to Syracuse.

The two figures in the illustration are dressed in clothes that display their current status and success. A dress and a suit, a brooch and a parasol. This is juxtaposed with the cotton dotting the background and the tombstone to their right, which reads, “In Memoriam of those whose remains reside across this land. The soil belongs to the ancestors,” and is dated 1619-1865.

“This image for me takes place after slavery; this is them coming back to their home ground or their family’s home ground, coming to pay respects to where they came from,” said Campbell. “…Their family history didn’t stop on that plantation; it went off and their descendants were able to do so well for themselves.”

Within the context of his own family, Campbell sees himself as doing just that. His great-great-great-grandfather—the central figure in his family book— began life as a former slave and eventually owned land and established a legacy for future generations of the Hines name.

“I’m carrying the torch from that…” said Campbell. “It was written in the books for me before I was even born that I was going to be great. And I’m trying to live up to that.”

The rest of the series grew out of the Homecoming illustration, ideas and stories of family and Black history inspiring Campbell’s work.

As a storyteller, Campbell is looking to change the narrative for Black people. By using human figures as the subject of his art, he is able to capture glimpses of life and history, to travel through time and uncover the past by telling the stories of those who lived it.

Another illustration in the series, Sunday’s Best, is centered around Campbell’s great-great grandparents, Abbie Hines Clanton and Reverend Hartridge Clanton. His great-great-grandmother’s story is one that Campbell feels particularly connected to.

Growing and selling vegetables, Abbie Hines was an entrepreneur, a term that can also be applied to Campbell. Despite the time between their stories, this connection demonstrates the kinship that Campbell was looking to represent in the series. Though they never met, they are connected through their shared history; their stories belong to one another.

Campbell has worked in digital media for eight years and uses Adobe Illustrator and Photoshop to create his illustrations. Using these programs to bring his distinct style of geometric shapes and bright colors to life, digital illustrating allows for Campbell to tell Black stories in his own unique way.

His homecoming to Syracuse is not to be overlooked; Campbell’s upbringing in the area, spending time with family and neighborhood friends, impacted his becoming a creative. He noted that his exposure to the Wescott community in particular played a role in his love for artwork.

Along with spending time on creating various series and pieces, Campbell has spearheaded a number of community projects.

His site states, “As a Black artist, it is my responsibility to create work that amplifies the black voices rarely seen in mainstream media. Having ACCESS is something that rarely comes to Black folks pursuing art careers on a grand scale. When it does come together just right, magic can happen!”

The Jaleel Campbell Art Fund helps to fund these public art programs and can be found at https://www.jaleelcampbell.com/donate/. 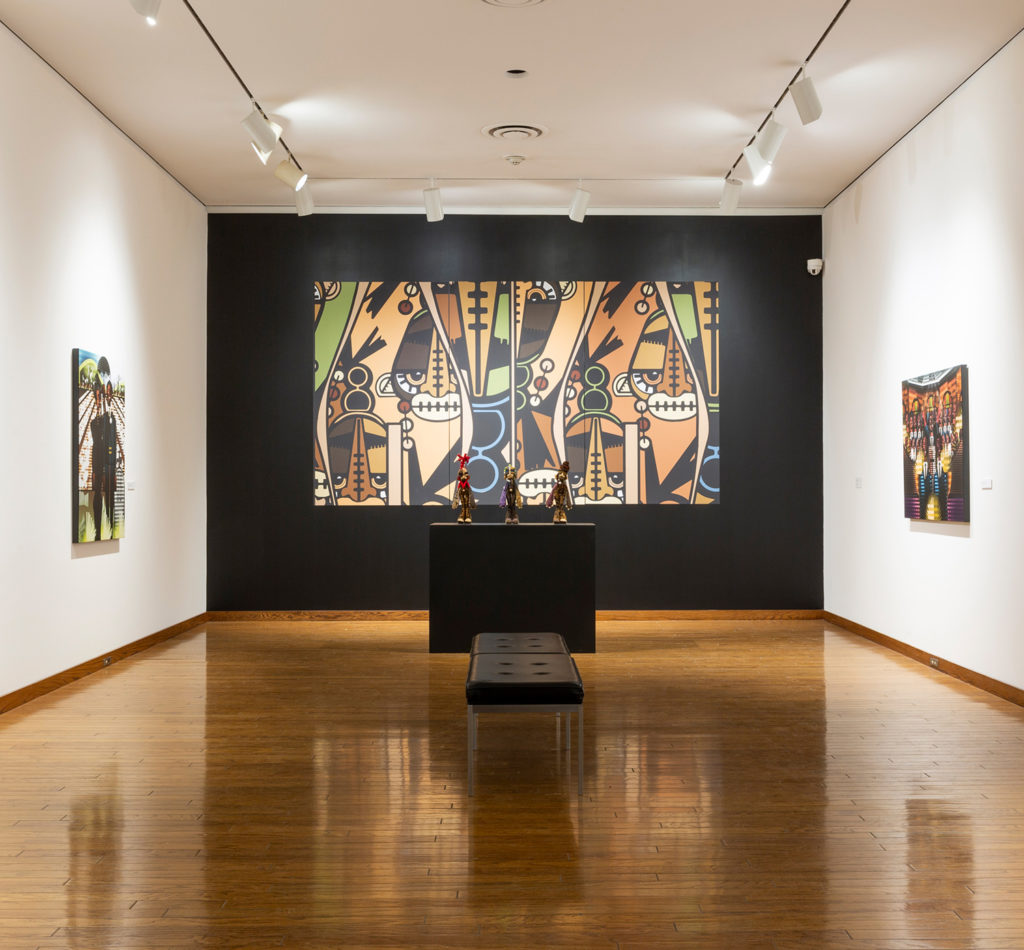 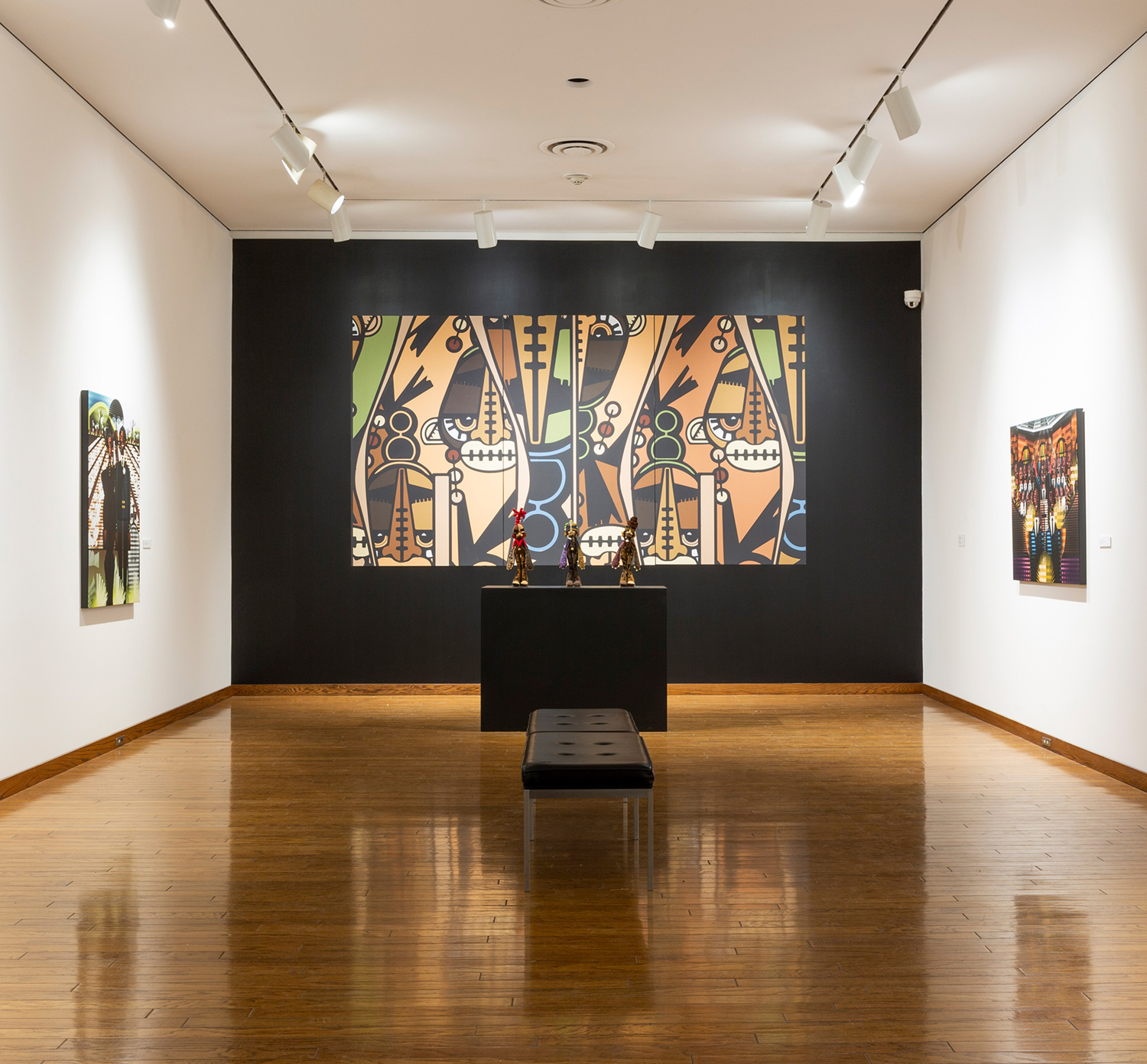