Object of the Week: Mural for MoMA Exhibition, by Reginald Marsh

Reginald Marsh’s (1898-1954) paintings capture the expansive growth and frenetic energy of everyday urban life in New York City in the 1920s, 30s, and 40s. Marsh moved to New York after graduating from Yale University in 1920, and quickly found success as an illustrator and political cartoonist, working for publications such as New York Daily News, The New Yorker, Harper’s Bazaar, and New Masses. Already an adept illustrator, Marsh began taking painting classes at the Art Students League in 1921 (where one of his first teachers was John Sloan), and after a trip to Paris in 1925 where he met Social Realist painter Thomas Hart Benton, Marsh returned to the city with an eye towards painting the characters that filled its streets. In 1932, the Museum of Modern Art invited Marsh (along with sixty-four other artists) to participate in an exhibition they hoped would cultivate interest in mural painting, which had grown in popularity over the previous year. MoMA asked each artist to design a horizontal composition in three panels that addressed the subject of the contemporary world, to create a study for the mural that was 21 by 48 inches in size, and to fully realize one panel of the design at a size of 84 by 48 inches. The artists were permitted to use any medium they chose, as long as the final works addressed “the Post-War World.” The forward to the exhibition catalog notes, “While the exhibition will interest the general public, it is hoped that architects and others responsible for the selection of mural designers will study these paintings and photographs with special reference to the possibilities of beautifying future American buildings through the greater use of mural decoration.” For his contribution, Marsh found inspiration in the energetic growth of his home city in the decades following World War I. His mural study, which is also in the Everson’s collection, shows a bustling city overflowing with heavy machinery and vivacious urban dwellers. A large train stretches across the three panels of the composition, backed by the recognizable New York City skyline. In a nod to the amusements found on Coney Island, men and women ride carousel horses through the sky. Marsh chose the right-hand panel of his study to paint at full size, expanding on themes of modern transportation by including a blimp and a small airplane flying through the sky.

Forty-nine artists, including painters Glenn Coleman, Stuart Davis, Georgie O’Keefe, and Ben Shahn, responded to the call for entries. The exhibition displayed the full-sized panels directly above the smaller three-paneled studies, so museum visitors could fully appreciate each artists’ vision.

The Mural for the Museum of Modern Art Exhibition is on display in Visions of America, on view through August 19, 2018. 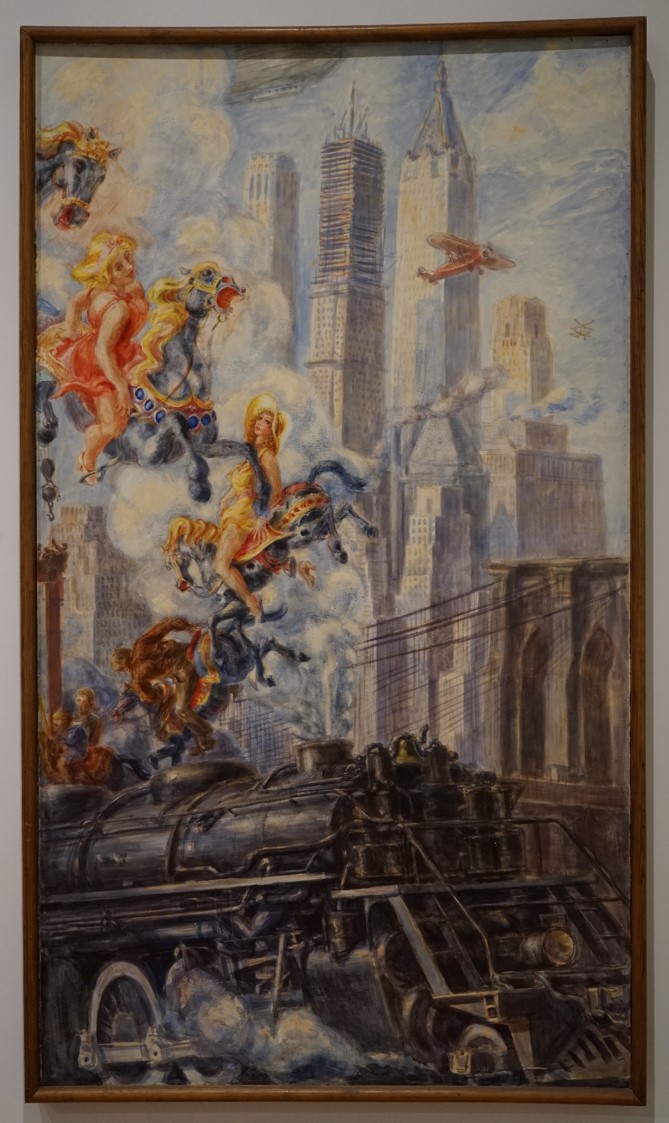