Object of the Week: Portrait of the Artist’s Daughter by J. Alden Weir

J. Alden Weir (1852-1919) was born to a family of artists in West Point, New York. His father, an accomplished painter, was a drawing professor at the Military Academy in West Point, and his older brother was a landscape painter and ultimately served as a professor of painting at Yale University. In 1870, with his family’s support, Weir moved to New York City at age seventeen to study at the National Academy of Design. Three years later, in 1873, he traveled to Paris and spent the next four years studying at the École des Beaux-Arts. In this time, Weir traveled all over Europe, absorbing history and culture. Weir’s education, first at the National Academy and then at the École des Beaux-Arts, was traditional and academic, and he favored a realist style when painting still lives and portraits. When Weir first encountered the radical Impressionist style, which rose to prominence in Paris in the 1870s, he was shocked. In a letter to his parents dated April 15, 1877, Weir wrote, “I never in my life saw more horrible things…. They do not observe drawing nor form but give you an impression of what they call nature. It was worse than the Chamber of Horrors. I was there about a quarter of an hour and left with a head ache…” Weir returned to New York City in 1877. He regularly exhibited his work at the National Academy and earned a living by teaching art classes and through painting commissions. Early in 1882, Weir met Anna Dwight Baker when she accompanied a friend to one of Weir’s drawing lessons. Weir and Anna became engaged a few weeks after meeting and married in 1883. The couple had three daughters, Caroline, Dorothy, and Cora, before Anna tragically died in 1892. By the 1890s, the view of French Impressionism as a radical style had faded, and American painters had happily adopted Impressionism as their own. Weir, who fifteen years earlier had scoffed at the loosely painted landscapes he encountered in Paris, was now building a name for himself as a prominent American Impressionist painter. In 1898, tired of the rejection Impressionism continuously received from the National Academy of Design and the Society of American Artists, Weir and nine other artists formed the exhibition group known as The Ten, in order to advocate for artistic freedom and innovation. The Ten exhibited together for twenty years. Weir’s Portrait of the Artist’s Daughter shows his daughter Dorothy around age twenty. Painted circa 1910, the portrait combines elements of realism and Impressionism. Dorothy’s features are sharply delineated, while her dress is rendered with soft, emotive brushstrokes. Correspondence in the Everson’s archives suggests that Fernando Carter, Director of the Syracuse Museum of Fine Arts (today the Everson Museum), saw the painting on display in the 16th Annual Exhibition of The Ten at Montross Gallery in New York City and decided to purchase it for the Syracuse Museum’s collection. The exhibition ran from March 12 to April 5, 1913. Letters between Carter and the gallery owner, N.E. Montross, indicate that Carter asked Montross to ship the painting to Syracuse once the exhibition closed so Carter could share it with Museum trustees and receive purchasing approval. While Carter had originally agreed to a purchase price of $2,500, his trustees balked at the fee. At Carter’s request, Montross succeeded in convincing Weir to discount the painting, and the Museum ultimately agreed to purchase the portrait for $2,000. Portrait of the Artist’s Daughter is currently on view in A Legacy of Firsts: The Everson Collects. 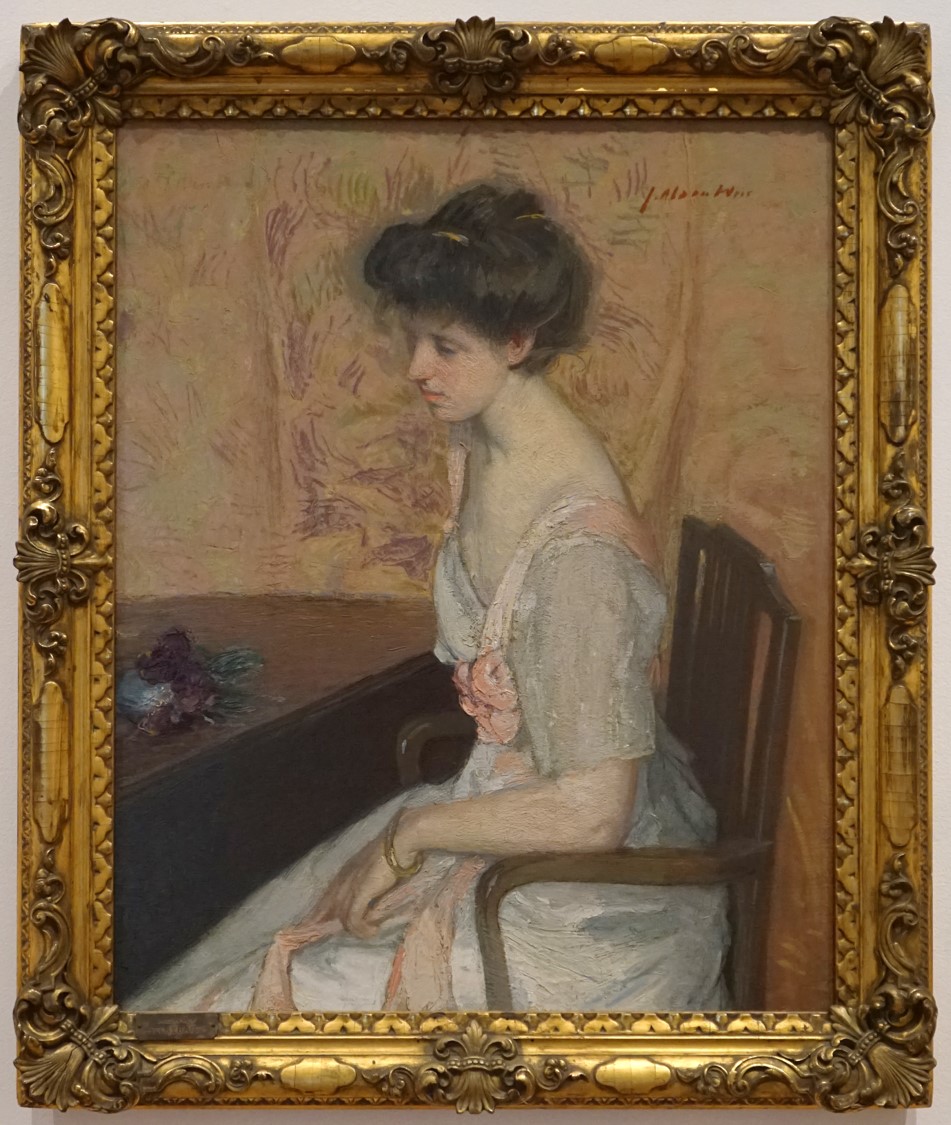