Object of the Week: The Bacchante by Arthur Van W. Eltinge

Arthur Van Wagenen Eltinge (1872-1931) was born in Kingston, New York. He showed an early interest in music and began teaching music and playing the organ in his local church at age fourteen. He enrolled at Syracuse University in 1890 to study piano and organ and received his bachelor’s degree in music in 1894. Upon graduating, Eltinge began teaching music at the University and giving private lessons to students living in the Syracuse area. He left his teaching position at Syracuse University after eight years to focus on private lessons and composing his own music. Eltinge became known as a skilled “teacher of teachers,” specializing in how to train music teachers to become better teachers themselves. Music was Eltinge’s career and passion, but he had another love: photography. Amateur photography became popular in the late nineteenth and early twentieth centuries as photography equipment became more affordable and easier to use. There were varying levels of amateur photographers, those who took snapshots of their family and their leisure activities, and those more practiced amateurs who viewed photography as an art form. Eltinge belonged to the latter group, and despite his full time career as a teacher and musician, he took photography seriously, participating in exhibitions all over the country, from New York to Hawaii. Eltinge was also a member of several photo clubs and organizations, including the Pacific Photo Club (based in California), and was mentioned frequently in American Photography, a monthly subscription published in Boston that promoted photography competitions and featured articles about techniques and exhibitions. The Bacchante is one of fifteen photographs by Eltinge in the Everson’s collection. Made between 1919 and 1921, the photographs draw upon the Pictorialist style. Pictorialism developed in the late nineteenth century as photographers worked to prove their medium was a legitimate form of fine art, valued beyond its ability to capture an image of the real world. Pictorialists often created photographs that were dream-like or otherworldly and used techniques such as soft focus and color tinting to create abstract scenes. They also manipulated their prints during processing in the dark room, mixing different developing chemicals and scratching or brushing the photograph as it dried. Eltinge’s photographs in the Everson’s collection feature three young women wearing ethereal, flowing dresses, posed together and individually in a park setting. Two of the young women are Priscilla and Elisabeth Robineau, the daughters of famed ceramist Adelaide Alsop Robineau. The Bacchante likely shows Priscilla, who would have been about eighteen at the time, captured in the midst of a dance. A bacchante was a priestess or a follower of Bacchus, the Roman god of agriculture, wine, and fertility. Eltinge submitted The Bacchante to the International Salon, an annual exhibition held at the Los Angeles Museum of History, Science, and Art from 1918 through 1947 (“International Salon, Los Angeles, California, No. 267” is stamped on the back of the photograph). The Bacchante is currently on view in Time Returns: A Continuous Now through August 4, 2019. 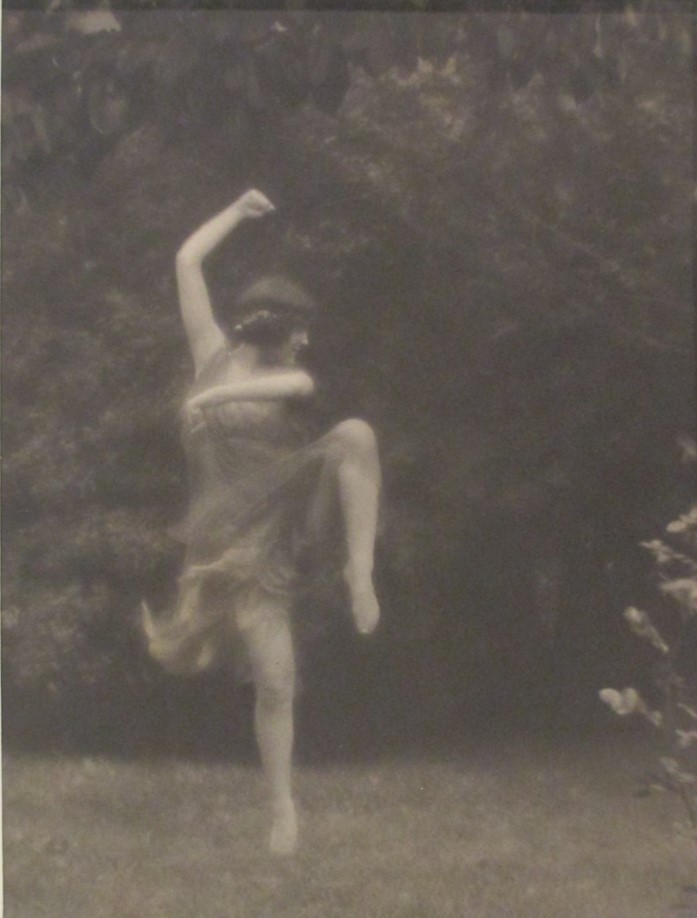