Object of the Week: The Lonely Knight, by Coille McLaughlin Hooven

Coille McLaughlin Hooven was born into an important pottery heritage. Hooven’s great aunt Mary Louise McLaughlin was instrumental to the American art pottery movement as one of the first studio potters in the United States. McLaughlin wrote the first manual on china painting in the US, helped to found the Cincinnati Pottery Club, and was the first American artist to develop an underglaze technique for decorating ceramics at a time when few others in the world had the ability. While Hooven never had the opportunity to converse with her great aunt about ceramics—McLaughlin died in 1939, the same year Hooven was born—she feels deeply connected to her ancestor and carries her legacy of innovation and skill into the twenty-first century.

Hooven enrolled in her first ceramics class, taught by master ceramist David Shaner, at the University of Illinois in 1959. After receiving her BFA, Hooven began working at the Maryland Institute College of Art in Baltimore, where she expanded the ceramics program from a single class to an entire department and served as Department Chair. In 1969, Hooven traveled to California for the first time and became enamored with the West Coast ceramics scene, which she viewed as more welcoming and less restrictive than its East Coast counterpart. She moved to Berkeley in 1970, and the Bay Area ceramics community fully embraced her as one of their own.

In Berkeley, Hooven began creating the delicate porcelain sculptures she is known for today. Considered one of the first ceramists to address feminist issues in clay, Hooven makes whimsical and imaginative teapots, vessels, busts, and sculptural scenes that explore female identity and the roles of women in modern society. The works appear delicate and “feminine” due to their small scale and precious nature—enhanced by the use of porcelain, the most fragile of all clays—yet they speak to Hooven’s strengths, obtained through her personal experiences as a woman artist, a wife, and a working mother.

Hooven’s work incorporates a cast of creatures from nursery rhymes, fables, and fairy tales into scenes with everyday domestic objects. The spout of a teapot morphs into the head of a dog, or a long-necked creature rises from the depths of a shoe, as in The Lonely Knight. Using both playful and surreal elements, Hooven addresses ideas of domesticity and family relationships, particularly the highs and lows of parenting. Her work has a sense of humor and quirkiness, often underlain by darker emotions of separation or loneliness. For example, the long-necked creature in The Lonely Knight lovingly holds a fish in its arms, but they both appear trapped inside the shoe, which has inexplicably grown a set of threatening claws.

The Lonely Knight is on display in Recent Acquisitions in Ceramics through April 1, 2018, alongside another of Hooven’s works: Blue Dog. 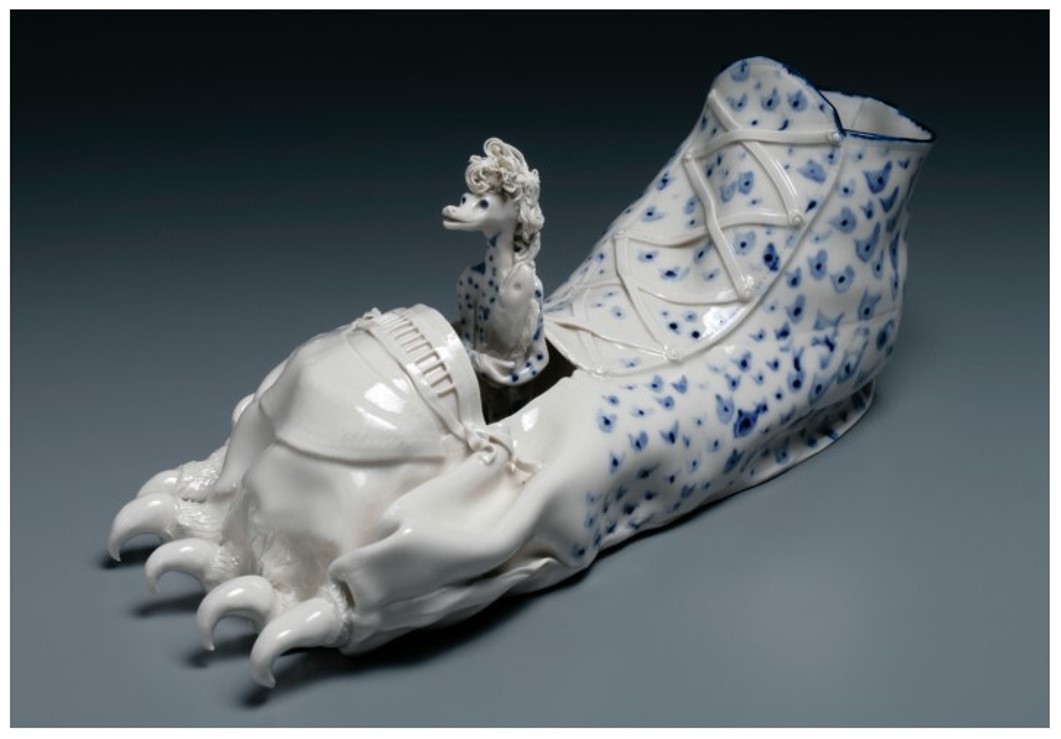