Born in 1942 in Nagoya, Japan, Jun Kaneko studied painting at a young age, and in 1963, he moved to California in order to continue his art education at the Chouinard Art Institute. His interests quickly changed, however, after exposure to ceramic work of the California Clay Movement. Also known as the American Clay Revolution, artists working in this style departed from the utilitarian objects typically associated with ceramic art and instead created largescale and often abstract sculptural works. Deeply inspired by these artists, Kaneko began his first experiments with clay. After the Chouinard Art Institute, Kaneko continued his ceramics education at the California Institute of Art in Los Angeles, the University of California at Berkeley, and Claremont Graduate School, studying with several master ceramists of the California Clay Movement, including Ralph Bacerra, Paul Soldner, Jerry Rothman, and Peter Voulkos. Kaneko approached his early ceramic works as if they were paintings, using brushes to paint slips and glazes onto clay slabs. His early training as a painter ingrained in Kaneko an interest in color and surface treatment, which when paired with his interest in three-dimensional form, created an entirely unique body of work. Kaneko’s first works were smaller in scale, but his sculptures eventually grew in size—Kaneko has noted that it feels natural for him to work on a large scale—and in 1982 he began to develop his “dangos,” a series of monumental ceramic sculptures ironically named after bite-sized Japanese dumplings. Since successfully firing and glazing the first six dangos in 1983, Kaneko has made hundreds in various sizes, some as large as thirteen feet tall. The dangos are always glazed with painted patterns, typically stripes, polka dots, or zigzags. When displayed in groups together, the massive dangos appear to be playful giants watching over viewers, an effect Kaneko hinted at when he explained the power of scale to New York Times writer Michael Kimmelman in 2007: “Small pieces you can turn around in your hand, you can look down at. Big pieces you have to look up at…I like pieces that I have to look up to.” Untitled (Polka Dot Dango) is currently on view in the Everson’s Rosamond Gifford Sculpture Court. -Steffi Chappell, Curatorial Assistant Image caption: Jun Kaneko, Untitled (Polka Dot Dango), 1988, 70 x 34 x 20 inches, stoneware, Everson Museum of Art; Museum purchase, 92.43 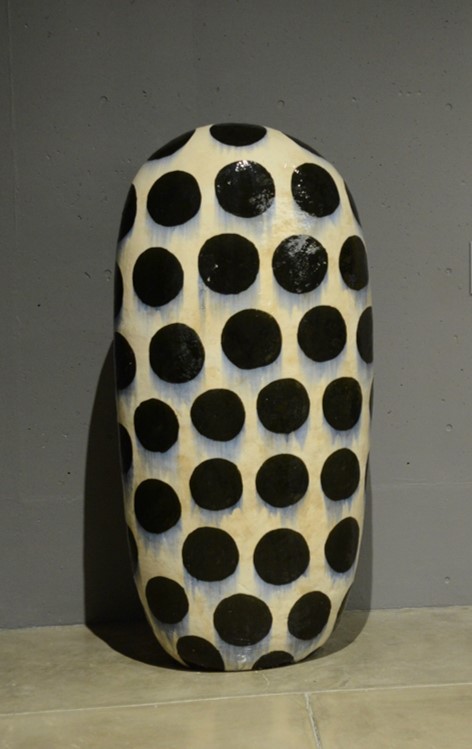